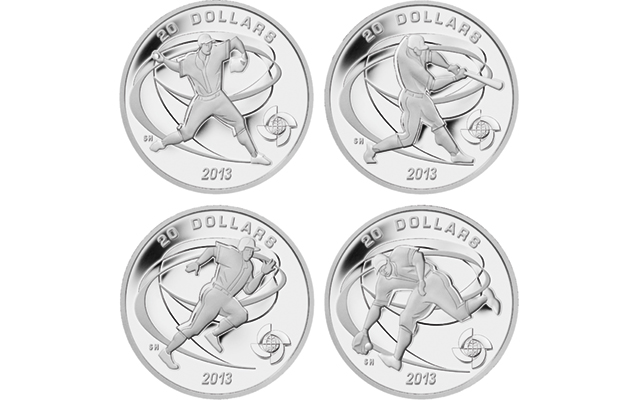 The World Baseball Classic, an event organized with the support of Major League Baseball, debuted in 2006 as a reaction to the International Olympic Committee’s decision to drop baseball from the Olympics following the 2008 Summer Games.

The second tournament was held in 2009, and the event is now scheduled to occur every four years. The Baseball World Cup has been abandoned, leaving the Classic as the premier international baseball competition.

To commemorate the 2013 World Baseball Classic, the Royal Canadian Mint celebrated the event with seven collector coins in an officially licensed program.

The silver $20 coins celebrate what the RCM calls the four positions in the sport: pitcher, fielder, runner and batter (there are actually nine field positions with varying names). The four coins highlight types of action that occur in the game.

A baseball soars in full flight on the Hardball $75 coin, while two interlocked bats flank the field on the Ball Diamond $75 coin. A joyous baserunner, viewed from behind, exults in victory, hands extended into the air as he runs to join his teammates (who are not shown) on the $150 coin.

The main themes are layered over an abstract circling form that represents the event’s speed, skill and international inclusiveness, according to the RCM.

With the top baseball talent located in countries ranging from the Netherlands to Japan to Cuba to Italy, baseball’s importance around the globe suggests that the sport figures to be a subject of world coins for years to come.