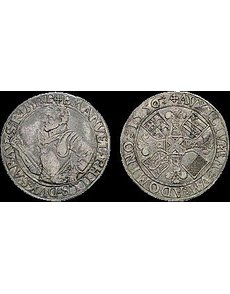 A 1556 silver tallero of Emanuele Filiberto, in imitation of coins issued by a warlord from 16th-century Germany, highlights Busso Peus Nachf.’s auction No. 404, scheduled for Nov. 2 to 4.

More than 3,600 lots of ancient, medieval, oriental and modern coins, as well as paper money, are offered in Busso Peus Nachf.’s auction No. 404, scheduled for Nov. 2 to 4. The auction is scheduled to be held at the nh-Hotel Frankfurt City in Frankfurt-am-Main in Germany.

Highlighting the auction is a 1556 silver tallero of Savoy. The tallero, issued under Emanuele Filiberto, is one of the great rarities in the Italian series.

Filiberto issued the coins in imitation of silver talers of the notorious warlord Markgraf Albrecht von Brandenburg, who issued coinage to finance raids in different territories of the German empire in 16th century Germany. Because of the warlord’s exploits, the talers proliferated and became targets of imitation, including the issues by Filiberto, one of several princes who borrowed the general pattern of this well known coinage with the image of the ruler on one side and four coats of arms in a floral cross on the other.

The silver content of Filiberto’s imitations was, however, significantly lower than the content of the original coins of Albrecht von Brandenburg. And although the legends as well as coats of arms on the pieces in the name of Filiberto identify correctly the Savoyan origin of this currency, the mostly illiterate contemporaries were fooled often enough into confounding them with the similar looking but more valuable coins from Brandenburg-Kulmbach, according to the auction firm.

Auction No. 404 also features the Alexander Persijn Collection of Paper Money, Part I.

The auction is joined by the firm’s 405th auction, which comprises the Dr. Eckhart Pick Collection of coins from Mainz. That sale is scheduled for Nov. 3, at the same venue as auction No. 404.