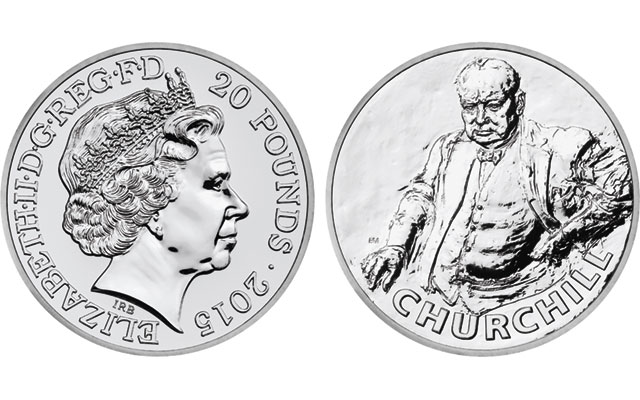 Sir Winston Churchill is the latest subject of the Royal Mint's third £20-for-£20 silver coin. The coin went on sale at noon Greenwich Mean Time Jan. 15. 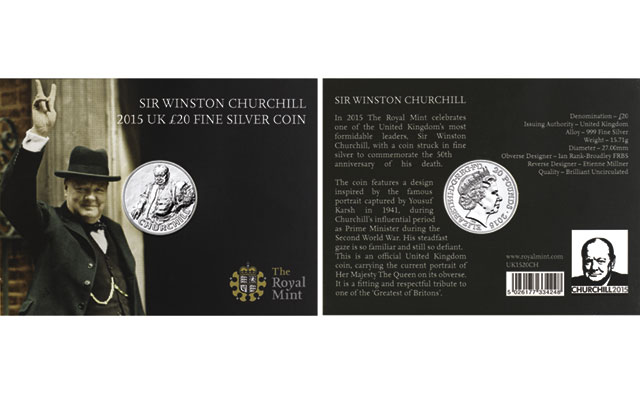 Packaging for the Royal Mint's newest £20-for-£20 coin celebrating Sir Winston Churchill shows a famous image of the leader giving the "V for victory" sign. 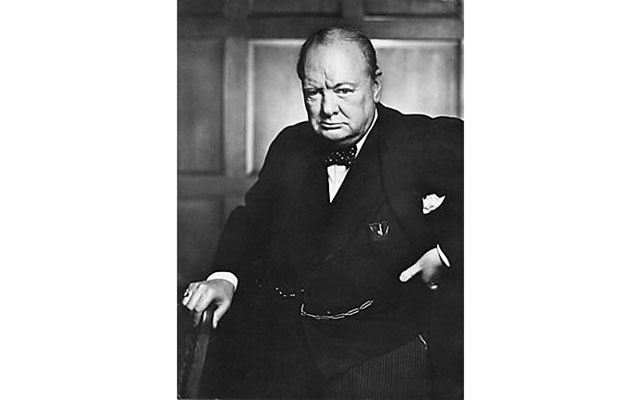 This famous photograph of Sir Winston Churchill, taken in 1941, was the inspiration for the reverse design of the Royal Mint's new 2015 silver “£20-for-£20” coin.

British statesman Sir Winston Churchill is the subject of the Royal Mint’s third silver “£20-for-£20” coin.

Twice Britain’s prime minister, and renowned the world over for his unyielding leadership and formidable character, Churchill is regularly voted as the “Greatest Briton” in public polls.

The reverse of the Churchill £20 coin was designed by figurative sculptor Etienne Millner, who took his inspiration from a celebrated photograph of Churchill captured by Yousuf Karsh in 1941.

The coin bears the current Ian Rank-Broadley effigy of Queen Elizabeth II on its obverse.

The coin marks 50 years since the death of Churchill in 1965, when the Royal Mint first produced a commemorative coin in his honor. The new 2015 coin joins a circulating commemorative £5 coin already issued in 2015.

The first £20-for-£20 coin, bearing Pistrucci’s classic St. George and the dragon design, sold out rapidly after its release in 2013. Its successor was released in 2014 to mark the centenary of the outbreak of World War I and remains available.

Shane Bissett, the Royal Mint’s director of Commemorative Coin, Bullion and Medals said, in a press release: “Sir Winston Churchill holds a significant place in Britain’s history as a great leader, soldier, artist and writer, not only acting as Prime Minister on two occasions but also leading the country twice through the dark days of war. His image, reputation and legacy are instantly recognisable all over the world, therefore it is only fitting that he takes pride of place on The Royal Mint’s third £20 for £20 coin.”

Millner is a leading figurative sculptor, creating works in clay and plaster that are later cast in bronze. A fellow of the Royal British Society of Sculptors and vice president of the Society of Portrait Sculptors, much of his work is portraiture, often life-sized or larger. Etienne’s subjects include politicians, artists, writers and many personal commissions. Millner’s latest work includes a queen’s Diamond Jubilee life size sculpture commissioned by the Leathersellers’ Company.

This is his first commission for the Royal Mint and it provided an enjoyable challenge, he said, in a press release.

“My work is normally very free, and while I achieve a good likeness to the subject my portraits are not entirely literal. Working within the confines of a coin’s size and relief took some practice and for Churchill I could only work with photographs instead of a sitting. I turned to the famous portrait taken by Yousuf Karsh in 1941, however, the picture is dark and I had to turn to other lighter prints for some of the fine details. Working with the coin’s relief forced me to simplify and emphasise the strongest features, all helping to achieve the likeness of such a familiar figure.”