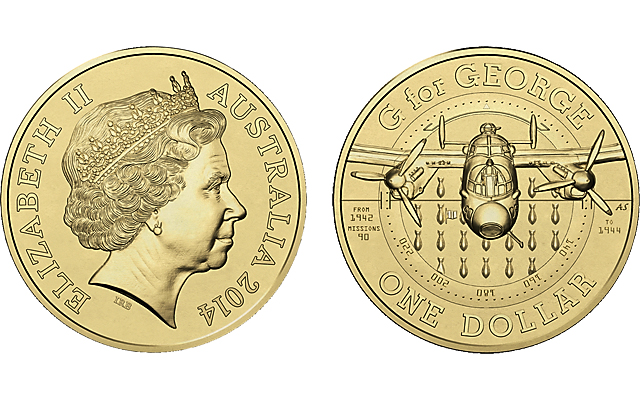 The Royal Australian Mint’s newest dollar coin celebrates the legendary World War II bomber known as the “G for George.” The plane served 90 missions over Nazi-occupied Europe during 1942 to 1944 before being retired. 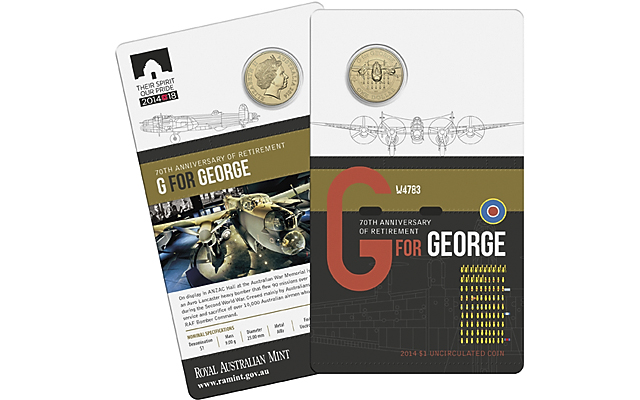 Packaging for the limited-mintage “G for George” $1 coin highlights the history of the important Australian plane.

Seventy years after it last flew a wartime mission, one of Australia’s most famous wartime bombers receives the honor of appearing on a dollar coin.

The noncirculating legal tender coin marks the 70th anniversary of the retirement of G for George, the Avro Lancaster W4783 on display at the Australian War Memorial.

The Royal Australian Mint announced the coin on May 30, to coincide with the annual Bomber Command wreath-laying ceremony held on the Memorial grounds on June 1.

The aircraft served in 90 operational missions over Germany and occupied Europe during the height of the bomber offensive in World War II. Its affectionate nickname was the result of the prominent "G" in its squadron code, and the plane's legacy was both empowering and uniting for more than 10,000 airmen.

From the time it was built in 1942 until its retirement from active service in 1944 the bomber served in No. 460 Squadron Royal Australian Air Force.

It is one of only a handful of the world’s surviving Lancasters from World War II.

The Royal Australian Mint has produced the coin in honor of the aircraft, its many crews and all Australians who flew in Bomber Command. The reverse of the coin features the G for George over a background drawn from the markings on the bomber’s side, signifying successful missions. The Ian Rank-Broadley effigy of Queen Elizabeth II appears on the obverse.

G for George is one of the most popular exhibits at the Australian War Memorial. The aircraft is currently on display in the “Striking by Night” exhibition in Anzac Hall, a permanent display featuring a dramatic sound-and-light show that re-creates a night bombing operation over Berlin in December 1943. Three German Messerschmitt fighter aircraft also feature in the display.

It has a mintage limit of 30,000 pieces and is packaged in a card featuring the plane schematic and images of the 90 bombs displayed on the side of G for George representing the number of missions it flew.

The commemorative coin retails for $13.50 Australian and is being sold by the Royal Australian Mint and distributor Downies.

To order from the RAM, visit its online store.