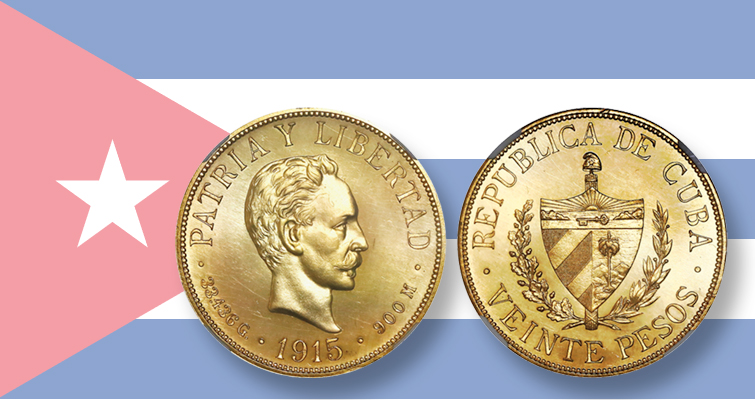 This unique Cuban 1915 gold 20-peso coin, estimated at $20,000 and up, is one of six specially struck coins being individually offered from a set going to auction Nov. 2.

Given the decades of tension between the United States and Cuba, and the resulting embargo, many folks might be surprised to learn how close the nations were once connected.

The connection was reflected in a most tangible economic indicator — coinage.

The individual coins in a unique set of 1915 Cuban gold pesos are for sale Nov. 2 in Daniel Frank Sedwick’s Treasure Auction 24. The Cuban gold set is made of all six denominations (1-, 2-, 4-, 5-, 10- and 20-peso pieces) struck by the Philadelphia Mint on behalf of the then fairly new Republic of Cuba.

The coins were all designed by U.S. Mint Chief Engraver Charles Barber.

According to the firm, what makes the set rare is that five of the six coins are recognized by Numismatic Guaranty Corp. as Specimen strikes. To date, no other Specimen examples for those denominations are known.

The only outlier to the set is the 5-peso coin, which, while not having the Specimen surfaces the other coins possess, was clearly well struck and specially handled.

NGC graded the 5-peso coin Mint State 66+, the finest known in both the NGC and Professional Coin Grading Service censuses.

The individual coins in the set will appear in the auction as lots 146 to 151. Final bids for the coins will be taken Nov. 2, with bidding available live at auction.sedwickcoins.com.

“Having this set in the auction really speaks to the strong market behind Latin American coins,” said president and company founder Daniel Sedwick. “It’s anyone’s guess as to where the final bids will end up but we’re expecting heavy interest from many experts and collectors.”

Another highlight of Sedwick’s two-day sale, Nov. 2 and 3, is a Mexico City Mint Charles and Joanna 3-real coin, struck around 1536 to 1538, one of the earliest coins minted in the Americas.

Full auction information is available at the company website.