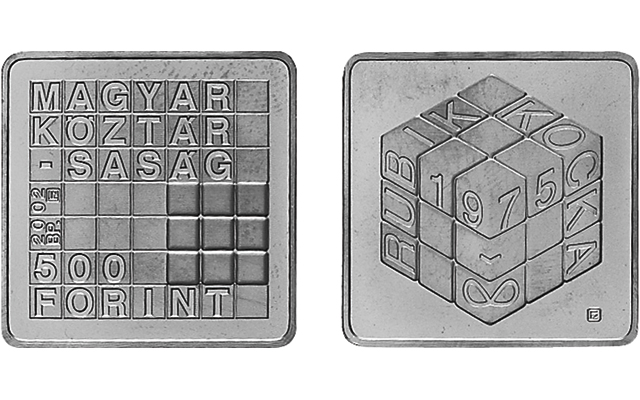 Rubik’s Cube has confounded, entertained and challenged users since it was invented 40 years ago.

Google even launched an interactive “Doodle” today to celebrate the six-sided puzzle’s anniversary.

But the colorful cube and its inventor are also honored on a Hungarian commemorative coin.

The three-dimensional game was invented in 1974 by Hungarian sculptor and professor of architecture Erno Rubik. In 2002 the Central Bank of Hungary honored the man and his creation on a 500-forint coin.

The rectangular coin does not recreate the cube's six colors, unfortunately, so collectors will have to imagine orange, red, green, blue and yellow squares superimposed on the coin's copper-nickel-hued surface.

Originally called the Magic Cube, several hundred million Rubik’s Cubes have been sold since they debuted in the West in the 1980s.

The copper-nickel coin is far more rare — issued in both Proof and Uncirculated versions, each has a mintage of 5,000 pieces.

The coin is infrequently seen at auction sites, so finding one is no less a challenge than completing the famous cube in record time.