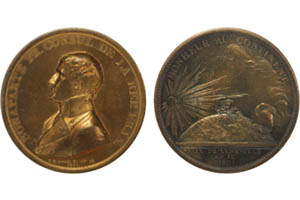 The 55-millimeter medal, above, celebrating the 1801 Peace of Lunéville, describes peace as “The Good Fortune of Europe.” Napoleon Bonaparte’s portrait appears on the obverse.

Statesmen and soldiers, philosophers and ordinary folk have debated the merits of war and peace for millennia. Philosophers and medallic sculptors have generally come down on the side of peace. By comparison, expressions extolling the value of war are few and far between and are today viewed as abhorrent.

One recalls the sneering declaration of German Gen. Hans von Seeckt in the disastrous aftermath of World War I, “Eternal peace? A fine inscription for a cemetery!” Soon after, a fast-rising, hot-eyed former Austrian living in Germany named Adolf Hitler exclaimed, “War is mankind’s finest state!”

A century earlier, Napoleon Bonaparte, a soldier who rose from an artillery cadet to first consul of the republic and Emperor of the French, answered critics of the high death rates in his victorious campaigns with the statement, “The lives of a million men are nothing to me.”

Napoleon left a rich medallic legacy from his earliest campaigns in Italy and Egypt through his roster of victories and ultimate defeat and exile. Most medals celebrate military conquests. Nonetheless, a 55-millimeter medal celebrating the 1801 Peace of Lunéville describes peace as “The Good Fortune of Europe.”

A youthful, short-haired bust of the First Consul dominates the obverse, with a tiny signature of Jean Pierre Droz, the engraver and innovator in coinage production whom U.S. Envoy Thomas Jefferson tried to recruit to head the infant Philadelphia Mint. Bonaparte wears an ornate high-collared uniform without medals or decorations, as his Legion d’Honneur would not be founded until 1802.

The reverse presents a brilliant sunburst at left over a half-globe crowned with the olive branch of peace, showing France and England with legend BONHEUR AU CONTINENT, Good Fortune to the Continent. One wonders what the First Consul thought of the equation Peace = Good Fortune.

It is known that this piece was part of a special order placed by the prominent Baird family of Maryland in the early 1880s. The medal came to a New York auction in the early 2000s.