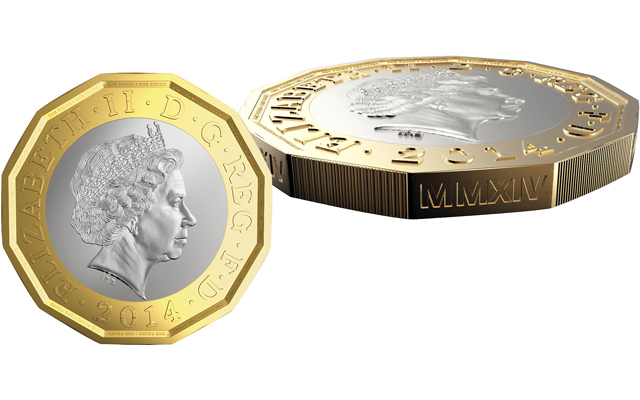 In 2017 the Royal Mint will launch what it says is the a more secure £1 coin aimed at thwarting counterfeiters. The iSIS technology to be used in the coin is derived from paper money security and can be offered to clients around the world.

The major factor expected to drive growth at Britain's Royal Mint going forward, announced in early April 2014, is the overhaul of the £1 coin with a new alloy and stronger anti-counterfeiting technology.

The revamped coin won’t begin circulating until 2017, but it is being built on two recent innovations from the Royal Mint, one a plated coinage system and the other the Integrated Secure Identification Systems technology, which reportedly cost more than £2 million and took four years to develop. In January, the Royal Mint won the Wales Innovation Award 2013 for developing iSIS.

The iSIS technology is borrowed from the paper money industry (the Royal Mint said the technology employed with coins has been available to notes for two decades). It will allow cash handlers to sort through 4,000 coins a minute and pull out fakes, according to statements from Andrew Mills, director of circulation coins at the Royal Mint.

The technology will not wear and has “multiple levels of banknote-strength security built in,” Mills said. The technology is embedded in the coin, according to the Royal Mint. The “ingredient” reportedly can withstand temperature of up to 850 degrees Celsius and the striking pressure exerted by coinage presses during regular production.

The Royal Mint has developed different readers that can be linked to coin acceptance and processing systems for different users in the coin stream, from vending machines, to cash centers, to central banks.

Besides offering what the U.K. Treasury believes is an answer to the plague of counterfeit £1 coins, the iSIS technology can be offered to world coin clients, who have already been targeted for the Royal Mint’s other technological advancement, a plated coinage system called aRMour.

The Royal Mint’s aRMour full-plated coins typically have 25 microns of plating and are said to last 25 years.

By pairing iSIS and the aRMour plating, the Royal Mint is firing back at the Royal Canadian Mint, whose multi-ply plated steel coins, developed more than a decade ago, can now be paired with the RCM’s Digital Non-Destructive Activation (DNA) technology that debuted on $1 and $2 coins in Canada in 2012.

The Royal Mint, like the RCM, has made significant investments in recent years to expand its plating production facilities, allowing the Royal Mint to increase its market share as more countries adopt plated coins to keep costs minimal.

The Royal Mint competes in an already crowded field, with the RCM’s service (dubbed SM&RT) and others like Mint of Finland group (and its CoinTune technology), the Royal Australian Mint and the Mint of Japan, to name a few, all vying for circulating coin contracts amid a growth in digital payments and the withdrawal of small denomination coins from circulation.

Two years ago, as part of the launch of aRMour, the Royal Mint began striking 5-penny and 10-penny coins with the nickel-plated steel alloy instead of using a copper-nickel alloy. Though some were concerned about allergic reactions to the nickel, the Royal Mint reported that its testing suggests the concerns were unfounded, and the new lighter, cheaper coins have proliferated.

After switching coining to the plated alloy, the Royal Mint began an alloy recovery program, harvesting older coins for their copper-nickel, which is melted and sold. If the idea sounds familiar, it’s because the Royal Canadian Mint developed it nearly a decade ago as a way to drive orders for replacement coins (which are plated and cost less to produce than the copper-nickel coins) and to reap money from the reclaimed metal.

At the Royal Mint, older alloy coins are processed in a machine that obliterates the designs at a rate of 1 ton per hour, so the coins can be sent to outside contractors to be melted.