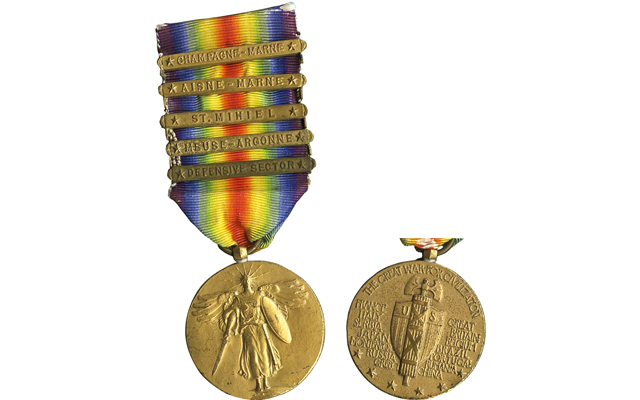 The World War I Victory medal presented to Pfc. Kimball has five bars attached detailing his combat experiences in some of the bloodiest confrontations of the war — Champagne-Marne, Aisne-Marne, Saint-Mihiel, and Meuse-Argonne. 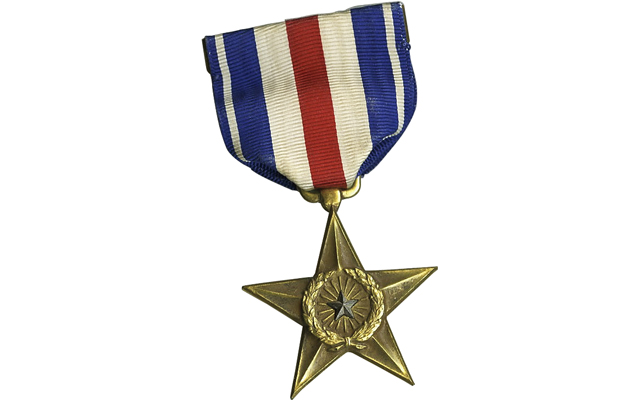 Within months of the Nov. 11, 1918, armistice ending World War I, the Allies reached agreement to adopt a Victory Medal for soldiers serving in their individual armed forces during the war. The Inter-Allied Military Commission on the Victory Medal, meeting in France, developed the design criteria that would result in the American Victory Medal we know today (and the medals for the other nations), according to Naval History & Heritage Command.

The medals would substantially be the same in design, but with some modifications for individual nations. The various Allied nations issued medals with a common reverse but with different artistic treatments of the obverse subject.

The Winged Victory of Samothrace was the theme for the obverse design, with each artist’s approach differing in designing the images for the respective countries.

The common reverse depicts a fasces upon a vertical shield, the field inscribed with the names of the Allied nations.

The obverse of the U.S. Victory Medal was assigned by the Commission of Fine Arts to sculptor James Earle Fraser, according to So-Called Dollars by Harold E. Hibler and Charles V. Kappen, revised by Tom Hoffman, Dave Hayes, Jonathan Brecher and John Dean.

Fraser worked with Medallic Art Co. in New York in preparing the models, reductions and hubs. Medals were struck in bronze — specifically, 90 percent copper, 10 percent zinc — at Art Metal Works in Newark, N.J., from dies that were fabricated at the Philadelphia Mint.

The U.S. version of the Victory Medal was the most widely distributed American award up to World War II.

The 36-millimeter, bronze medals were looped for attachment to a clasped ribbon, to which bars could be attached signifying battles in which the veteran participated.

Unlooped examples, struck in copper, are rare. Heritage Auctions sold a Numismatic Guaranty Corp. MS-64 red and brown example of the unlooped medal, HK-902 as attributed in the Hibler-Kappen reference, for $345 in a Sept. 27, 2007, sale.

The lot included, along with Kimball’s honorable discharge papers and a newspaper clipping pertaining to coin collecting, a World War I Victory Medal with five bars representing various campaigns in France in which Kimball served; a French Croix de Guerre (Cross of War) medal; Veterans of Foreign Wars and American Legion medals; and a Silver Star award.

The Silver Star, accompanied by the citation papers, was awarded to Kimball for “exceptionally meritorious service and gallant conduct” against the enemy at Marcheville and Riaville Sept. 25 to 26, 1918.