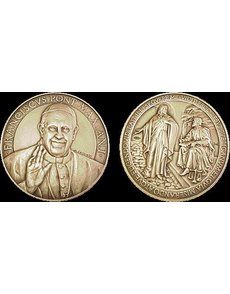 A new medal from the Vatican City celebrating the pontificate of Pope Francis features a glaring error, an L instead the Latin I (English J) in the reference to Jesus in the reverse inscription.

A new medal from the Vatican featuring an engraving mistake has become a modern-day rarity.

The medal, released Oct. 8, incorrectly lists the name of Jesus Christ as lesus in the legend surrounding the reverse design. The inscription is in Latin so the proper spelling would be with an I, not an L (or a J as would appear in English).

An unknown but likely extremely small number of the medals were sold during limited periods of availability, although some buyers were reportedly able to buy the medals after they were officially taken off sale.

Allen Berman, a dealer who specializes in Vatican numismatics, among other areas, said, “It looks like the L punch was mistaken for the I punch in preparing the dies.”

The medal celebrates the first year of the pontificate for Pope Francis. It shows the new leader on the obverse, while the reverse shows an image of the calling of Matthew, an account that influenced a 17-year-old Jorge Bergoglio to accept a call to the ministry.

The error appears in the reverse legend’s text from a Latin homily about Christ calling Matthew, vidit ergo lesus publicanum et quia miserando atque eligendo vidit, ait illi sequere me. The intended text would translate to “Jesus therefore sees the tax collector, and since he sees by having mercy and by choosing, he says to him, follow me.”

The medals are numbered and three different versions were issued: bronze, .986 fine silver and an unspecified fineness in gold. Coin World could not determine the finish and weight of the three medals, but each measures 44 millimeters in diameter, according to the Vatican Information Service.

Vatican Information Service reported the mintage of the medals totaled 400 three-medal sets, 200 individual gold medals and 3,000 each of the silver and bronze. Italian coin and antiques dealer Enrico Cavaglia’, of Antiques Italy, showed Coin World a certificate with the silver medal suggesting a mintage of 4,000 pieces. An employee of one of three shops Cavaglia’ visited told him that the number of medals released to sales outlets was less than the stated mintages.

“How can I say that it’s true or it’s false?” Cavaglia’ remarked.

The error medals were pulled off sale from the Libreria Eitrice Vaticana, or Vatican Publishing House, a bookstore in Piazza Pio XII, in front of St. Peter’s Square. The Administration of the Patrimony of the Apostolic See is the issuer of the medals, Cavaglia’ said.

Cavaglia’ said that he and fellow collectors were told the medals were sold out when calling by telephone or visiting in person official retail shops selling the medals.

Cavaglia’ said he witnessed transactions for the medals in some of these shops a week after the medal sales were initially halted, after people expressed a desire to obtain the medals.

Cavaglia’ later secured additional medals, but acknowledged that his purchase was possible because of a friend who works in the Vatican.

“There are so many steps in the process to check [the accuracy of the engraving],” Cavaglia’ told Coin World in an email interview.

Representatives for the Instituto Poligrafico e Zecca dello Stato declined to comment, and Coin World could not reach Administration of the Patrimony of the Apostolic See.

In an Oct. 22 eBay auction, a seller under the user name “duosiciliano,” based in Aquino, Italy, sold a bronze example of the error medal for $710.

Whatever the initial cost, the error has spurred interest in Vatican medals, an area that has not seen this level of excitement for years, according to Cavaglia’.

“[The Vatican has] an incredible marketing operation behind this ... they make people want their item. They [have] create[d] a desire in people to acquire something that in normal life is useless. ... They’re not even coins,” he said. ¦