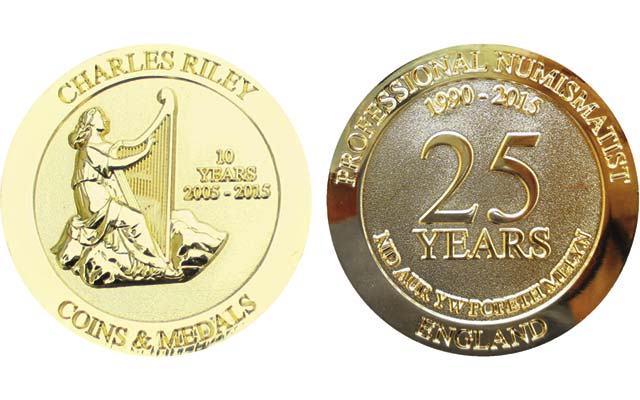 Dealer Charles Riley celebrates 25 years in the hobby and 10 years as a dealer with a 2015 medal. The dealer is based in the United Kingdom.

Dealer Charles Riley, based in the United Kingdom, has issued a medal to mark two anniversaries. The medal celebrates his 25 years in the coin collecting hobby, and 10 years as a self-employed coin dealer.

The medal’s obverse depicts a seated female harpist with inscriptions noting the company name and the business anniversary.

The harpist is from a design by renowned English medallist Joseph Moore originally appearing on Welsh eisteddfod medals of the 1860s. Riley adopted it for use as his logo.

The reverse is filled with inscriptions indicating the 25-year anniversary of 1990 to 2015, with a Welsh legend NID AUR YW POPETH MELYN (translating to “everything that glistens is not gold”), and PROFESSIONAL NUMISMATIST ENGLAND.

The Welsh language legend and the harpist logo are a nod to Riley’s personal interest in Welsh medals, and a jocular reference to the medal’s metal content (it is a gilded zinc-based alloy).

The medal diameter is 50 millimeters.

The medal will be given free to those who order another stock medal from his website (one Riley medal per customer), or is available individually for purchase.

In the UK, the cost is £12 per medal, including recorded delivery postage.

Payment can be made by Paypal using Riley’s email address charles.riley@virgin.net.

Residents of other countries are invited to seek a cost and shipping quote. The basic price is £10 per medal plus relevant registered postage cost to your country.

For more information, visit a special page at Riley’s website.