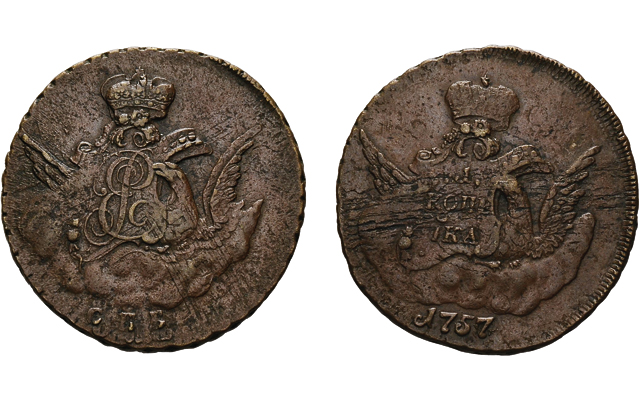 One highlight of the Sincona Collection of Russian coins and medals is a previously unknown 1757 Baroque style kopek. Though research indicated some were made, none were known to exist until the appearance of this example. 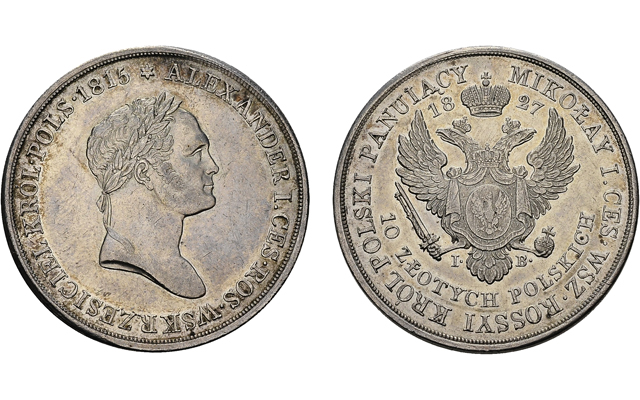 One of two known examples of an 1827 silver 10-zloty coin of Nicholas I, with the Mint master’s initials I.B. included, has not been sold publicly since 1913.

Russian rarities abound in Swiss International Coin Auction AG’s Oct. 13 to 15 auction of the third part of a landmark collection of Russian coins and medals, called the Sincona Collection.

One of the major highlights is the 1757 Baroque-style kopek of Elizabeth, the first of its date to be identified, though researchers had anticipated its existence among the different dates of Baroque kopeks. The example in the auction confirms what expert Bernhard Brekke in 1997 speculated based on Saint Petersburg Mint records, according to Vadim Shiryaev, Russian expert for Sincona.

Brekke, writing in a supplement to The Copper Coinage of Imperial Russia, 1700 to 1917, co-authored by Tom Willy Bakken, noted that examples of the 1757 Baroque kopeks remained to be discovered.

“Mint records show 6,200 rubles’ worth were made, but so far, no one has confirmed the existence of a coin,” wrote Brekke and Bajjen in 1997. “The open question is whether every last piece was held back at the Mint for overstriking into two-kopeck pieces in 1757 or later, or whether — in the light of human fallibility — some few did escape into circulation.”

The example in the Sincona auction is the only example known, and its newly reported existence shows that at least this one 1757 example did escape, according to the catalog.

As Brekke and Bakken wrote, “To date, no such specimens are known, if and when one does surface, it will be one of the major rarities of the series.”

Because of the level of preservation of the example in the Sincona auction, which the firm grades as Good Extremely Fine, experts do not doubt that the piece is a 1757 Baroque kopek. If it weren’t in that condition, there may be some doubt about the type’s existence, Shiryaev said.

In 1755, Elizabeth instituted a revaluation of copper to help fuel the militaristic demands that characterized her reign. Only kopek coins were issued of the new value, and the coins are named for the unusual obverse design, featuring a cipher and eagle on a cloud. Most of the known 1755 and 1756 Baroque kopeks were struck over the earlier 5-kopek coins, and that practice continued briefly into 1757; the example in the Sincona auction itself is overstruck on a circa 1723 to 1730 5-kopek coin.

In 1757, however, a further devaluation occurred, and a new design was instituted, so the 1757 pieces of the Baroque design type issued since 1755 weren’t issued for a full year.

The example in the Sincona auction weighs 17.52 grams and measures about 34 millimeters in diameter. It is double struck on obverse and the 7 in the date was recut over a “6” on the die.

The 1757 Baroque kopek is missing from famous collections and auctions, and has never been sold publicly before.

Another rarity in the Sincona Collection sale represents the first public offering of its coin type since 1913.

The collection’s example of a 1827-IB silver 10-zloty coin of Nicholas I, struck at the Warsaw Mint for use in Russian-occupied Poland, is only the third full-weight example known. The other pieces known are from the famed Count I.I. Tolstoy Collection that Adolph Hess sold in 1913 and the collection of the Grand Duke George Mikhailovich now in the Smithsonian Institution. An underweight piece that was part of the Count Hutten-Czapski Collection is a novodel, or restrike, according to Shiryaev.

This example has never been sold at auction before, and Shiryaev suggests that it could reach 1 million Swiss francs ($1,068,066 U.S.), or, if not those lofty heights, at least establish a record price for a Russian coin struck for use in only part of the Russian empire.

Russia was granted the Polish territory by the 1815 Congress of Vienna. The kingdom was granted autonomy within the Russian Empire, including the right to issue coins. The Warsaw Mint began its work in 1816, and gold and silver coins of Alexander I issued for Poland include a legend referencing his position as emperor of Russia and king of Poland.

Silver portrait 1-, 2-, and 5-zloty coins were supplemented in 1820 with a 10-zloty piece, minted in small quantities.

When Nicholas I began his reign in late 1825, he chose to have Alexander I, his predecessor, commemorated on silver and gold Russo-Polish coins. From 1826 to 1834 Alexander I was shown laureate; a legend identifying him as the Russian emperor who re-created the Kingdom of Poland appears with his portrait on the obverse. The legend on the reverse identifies Nicholas I as the emperor of all Russia and ruling king of Poland.

The tail feathers of a crowned two-headed Russian eagle on the reverse separate the initials of Warsaw Mint master Jakub Beník (noted as I.B., as on the example offered) or his successor, Fryderyk Hunger (indicated with F.H.).

“An assumption can be made that, with the blanks for the 10-zloty coin used up, it was decided to suspend its coinage,” according to Shiryaev.

The example in the Sincona auction weighs 31.24 grams and measures 39.1 millimeters in diameter.

Shiryaev said both the Tolstoy piece, whereabouts unknown, and the Smithsonian’s example are inferior to the Sincona example, which is described as “Uncirculated Proof with minor contact marks.”

The collection is rich with many other highlights, including a pattern ruble dated 1807, for which the original is unknown.

Struck at the St. Petersburg Mint, the pattern is one of two known of the type, but the only one with a smooth edge, though there are traces of the lettered edge having been “carefully smoothed,” according to the firm. A lettered edge example is part of the famed Hermitage Museum Collection.

This example was last sold in Hess and Bank Leu’s Nov. 7, 1968, auction, and this is the first time in more than 45 years that the rarity is available to the public.

The auction house classifies the coin as “Brilliant Uncirculated with prooflike fields” and gives it an opening bid of 50,000 Swiss francs ($53,428 U.S.).

Three coins from the collection have sold for the equivalent of $1 million U.S. or more apiece, with two of those topping $2.5 million U.S.

Buyer’s fees for the current sale range from 15 to 20 percent, depending on bidding method.