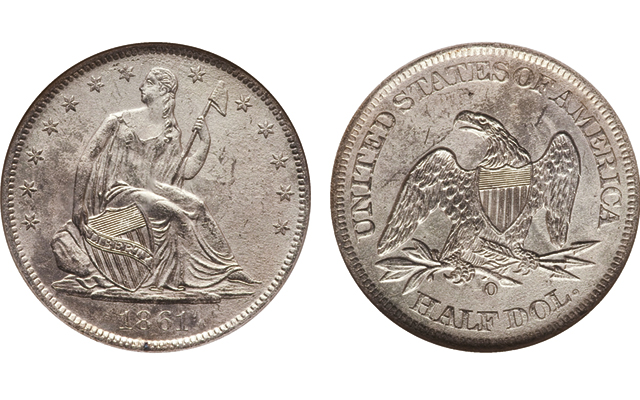 An 1861-O Seated Liberty half dollar struck by a reverse die used by the Confederate States of America, recovered from the SS Republic shipwreck and graded NGC “Shipwreck Effect” brought $1,057.50 at a 2013 Heritage auction.

When it comes to shipwrecks, gold coins have it lucky when compared to silver coins.

Gold is not particularly reactive and many properly conserved gold coins show virtually no evidence of their shipwreck status. For example, many of the gold coins from the SS Republic and the SS Central America were conserved to current market grading standards and have enjoyed a robust secondary market in the past decade.

Silver coins nearly always show evidence of their time in the sea.

NGC says that the service provides independent assurance of the pedigree of recovered artifacts and the service confirms that coins were recovered in an “archaeologically sound manner” and that the coins were “conserved by the least invasive means possible to ensure stability of the artifact surface and long-term preservation.”

NGC has established grading standards for shipwreck effect coins on an A, B, and C scale for the severity of surface problems resulting from exposure to saltwater, combined with a details grade to describe wear on the coin prior to saltwater exposure.

“Shipwreck Effect A” coins exhibit minimal surface disturbance from saltwater exposure and carry superior eye appeal for a shipwreck artifact. Coins in the “B” category will have above-average eye appeal. “C” coins have at least average eye appeal, with moderate disturbance to the surface, but “accurate attribution and identification is not hindered by any surface impairment.”

Coins graded with the general “Shipwreck Effect” grade show heavy to severe disturbance from saltwater exposure, with metal loss affecting the design. NGC adds, “While accurate identification and attribution may be possible, it is no longer possible to draw conclusive determinations about the coin’s surface prior to saltwater exposure.” But this does not mean that the coins are unattractive.

For example, an 1861-O Seated Liberty half dollar from the SS Republic graded NGC Shipwreck Effect is identified by its reverse as an issue struck under the Confederate States of America. The corrosion is clearly apparent on both sides, though it appears to have Mint State details. It brought $1,057.50 at a Dec. 6, 2013, Heritage auction, just over what a solid About Uncirculated 50 example sold for earlier that year.

While lower-value coins will get a boost from being certified as coming from a well-known shipwreck, higher-value coins often trade at a discount to problem-free coins