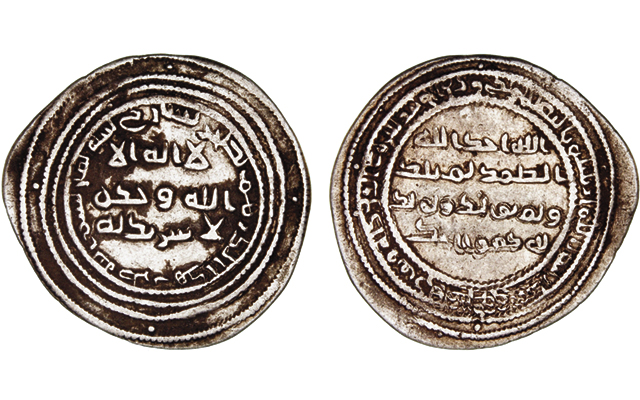 A silver dirham issued circa A.D. 697 to A.D. 699 in Tukharistan is a puzzle to scholars of Islamic coins.

The dirham, issued during the reign of Abd al-Malik ibn Marwan, highlighted Morton & Eden’s April 10 auction in London, where a private collector purchased it for £54,000 ($90,304 in U.S. funds), including the 20 percent buyer’s fee.

The dirham is the only known coin from any dynasty with the mint name of Tukharistan.

Tukharistan was a large district to the east of the great city of Balkh (in what is modern-day Afghanistan), extending along the southern bank of the Oxus River.

Beginning in A.H. 78, the governor of Khurasan in northern Persia (Iran) spent two years in Tukharistan while his son campaigned militarily further east.

The coin bears the date as thaman, which is 8, which could indicate it was issued during the Islamic year 80 (thamanin) or in 78, (thaman wa saba‘in).

The auction house suggests the date should be the latter, which aligns with the governor’s appointment.

Four pellets in the margins of the obverse presage the use of five pellets beginning in A.H. 79.

For more information and prices realized from the sale, visit the firm’s website, www.mortonandeden.com.