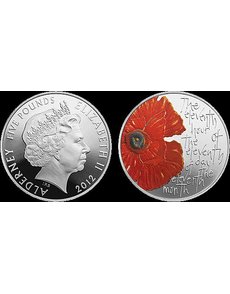 A new commemorative coin from the Royal Mint, a £5 piece for Alderney, honors veterans and the Remembrance Day holiday of Nov. 11. A colorful red poppy appears on the reverse.

Poppies are a familiar but impermanent symbol of Remembrance Day, the international holiday known to Americans as Veterans Day.

The Royal Mint’s latest commemorative coin, issued for Alderney, provides an everlasting and vibrant reminder of the sacrifice celebrated by the red poppy. The Brilliant Uncirculated copper-nickel and Proof .925 fine silver £5 coins feature a colorful red poppy on their reverse, “using trichromatic techniques which help capture the poppy’s dramatic colouring,” according to the Royal Mint.

The reverse was designed by Royal Mint engraver Emma Noble.

The obverse carries the current portrait of Queen Elizabeth II by Ian Rank-Broadley.

Every November, poppy wreaths are laid at war memorials and poppies are worn “to acknowledge the on-going bravery of the Armed Forces and remember those who have died in conflict,” according to the Royal Mint. This is the Royal Mint’s first Remembrance Day coin, and begins what is expected to be an annual series.

Noble said: “The 11th hour of the 11th day of the 11th month — it’s such a powerful moment. A moment the world remembers the bravery and the sacrifice. I wanted the coin to pinpoint that moment.”

The poppy has been synonymous with veterans’ remembrances since 1915 when a volunteer medical officer, John McCrae, was inspired to write “In Flanders Fields” after witnessing poppies flourishing on battlefields and the graves of the fallen. That inspired the wearing and sales of poppies in remembrance and to help veterans and their families.

The Royal Mint has pledged to donate 50 pence from each sale of the BU coin and £5 from each of the Proof coins sold to The Royal British Legion’s Poppy Appeal.

Both coins weigh 28.28 grams, and measure 38.61 millimeters in diameter. Mintage for the BU coin (which is available for £13) is unlimited, while the silver coin (which is offered at £83) has a mintage limit of 3,000 pieces.