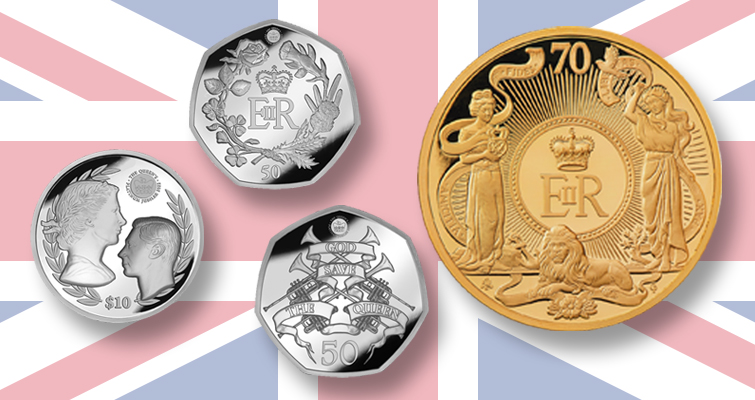 Images courtesy of the East India Company and Pobjoy Mint.

Her Platinum Jubilee, the 70th anniversary of her enthronement, is cause for a year-long celebration throughout the United Kingdom, the British Commonwealth, and elsewhere around the world. Official celebrations are centered on an extended weekend June 2 to 5.

The Pobjoy Mint’s program, as of press time, includes three designs, each available in copper-nickel and .925 fine silver versions.

All of the coins feature the effigy of Queen Elizabeth II used exclusively by Pobjoy Mint.

All of the reverse designs incorporate the official emblem for the Queen’s Platinum Jubilee, which was selected as the winning entry in a competition run in conjunction with the Victoria & Albert Museum.

A logical way to review the Pobjoy releases is alphabetically, by issuing authority, followed by the EIC issues.

The British Antarctic Territory is a sector of Antarctica claimed by the United Kingdom as one of its 14 British Overseas Territories.

Pobjoy has struck numerous coins for this location, the Platinum Jubilee 50-penny issues among the latest.

The reverse of each coin depicts a central design of the Royal Cypher EIIR standing for “Elizabeth II Regina.”

Coins of both offered metals weigh 8 grams and measure 27.3 millimeters in diameter

The Diamond Finish copper-nickel coin is presented in a special presentation pack. It has a mintage limit of 2,700 pieces retailing for $17.95 each.

The Proof silver coin is presented in an acrylic box complimented with a sleeve using the special design. It has a mintage of 170 pieces and retails for $69.95.

A double portrait appears on the reverse of the coins issued by Pobjoy on behalf of the British Virgin Islands.

The design is surrounded by a laurel wreath, used as a symbol of victory, success and achievement which is particularly apt for this historic anniversary.

The Uncirculated copper-nickel dollar is presented in a special blue pouch. It has a mintage limit of 2,700 pieces retailing for $15.95 each.

The Proof silver $10 coin is presented in an acrylic box with a decorative outer sleeve. The coin has a mintage limit of 170 pieces and retails for $69.95.

Issued on behalf of South Georgia and the South Sandwich Islands, this 50-penny coin design is inspired by the official Accession Proclamation released Feb. 8, 1952, following the death of Elizabeth’s father.

The scroll containing the official proclamation was read to the public by the garter king of arms, Sir George Bellew, first at 11 a.m. from the Friary Court balcony at St. James’s Palace, then in Trafalgar Square, in Fleet Street, and at the Royal Exchange.

The coin depicts a ribbon representing the scroll in the center, with trumpets of the Royal Heralds at each side. The inscription on the ribbon reads GOD SAVE THE QUEEN, as that is how the proclamation ended.

The Diamond Finish copper-nickel coin is presented in a special presentation pack. It has a mintage limit of 2,700 pieces retailing for $17.95 each.

The Proof silver coin is presented in an acrylic box complimented with a sleeve using the special design. It has a mintage of 170 pieces and retails for $69.95.

The East India Company, a modern company that continues the name and reputation of the historic firm, has issued an array of coins since a wealthy Indian citizen reformed the firm during the last decade.

These six coins are issued in association with the Government of St. Helena.

Joanna Mould, managing director of East India Company Collections, said, in a press release, that the St. Helena coins focus on the queen’s role as head of the Commonwealth.

All of the EIC coins feature the Jody Clark effigy of Queen Elizabeth II on their obverse.

Each coin is encapsulated and presented in a custom case and accompanied by a numbered certificate of authenticity and informative booklet. 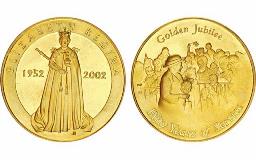 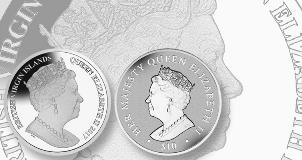 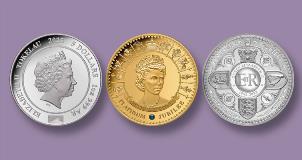