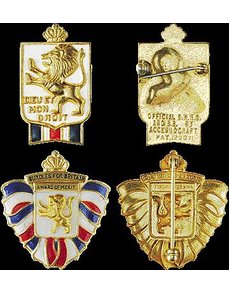 Bundles for Britain contributor badge is at top. At the bottom is a volunteers Medal of Merit, but absent the French motto.

Sharp-eyed collectors find in junk boxes forgotten pages of history in memorabilia and regalia of long-vanished organizations that once influenced the nation. The British War Relief Society, with its engagingly named Bundles for Britain program, lives on through its emblems with red, white and blue enamels or paint.

Varieties of membership pins and small award insignia were created by manufacturing jewelers Accessocraft and Monet bearing the Bundles for Britain shield with its golden lion rampant above the medieval French motto from the British Royal Arms, DIEU ET MON DROIT, “God and my Right.”

Some later gold-plated .925 silver badges exist with the wings of the Royal Air Force.

World War II began in Europe in September 1939, but the United States did not enter until the Japanese attack on Pearl Harbor on Dec. 7, 1941. Dissatisfied with the World War I settlements, many Americans were strongly isolationist in sentiment, and a number of well-placed congressmen worked to keep the nation out of war.

Organizations such as the America First Committee demanded continued neutrality from the government, opposing any incremental steps toward war as occurred during the administration of Woodrow Wilson in World War I.

Britain’s civilian population suffered severely after the German armies swept across France and forced the evacuation of British forces from Dunkirk in early 1940. Merchant marine and naval losses to German U-boat attacks choked off food imports and arrival of needed fuel, creating shortages.

Bundles for Britain began as a knitting circle in New York City founded by Natalie Wales Latham during 1940. She conceived it as a humanitarian organization that would supply nonmilitary aid such as clothing, medicines and financial donations to the British population.

With headquarters on Fifth Avenue, Bundles for Britain grew in 16 months into a national organization of 975 branches and a million contributors.

Rapidly expanding its efforts, it added heavier contributions, including ambulances, surgical instruments, field kitchens, cots and blankets, all together valued at $1.5 million, and $1 million dollars in cash.

Bundles for Britain continued through 1945 and merged with CARE (Committee for American Relief Everywhere).

DAVID T. ALEXANDER is author of American Art Medals, 1909-1995 and a fellow of the American Numismatic Society. He is a numismatist and researcher for Harlan J. Berk Ltd.