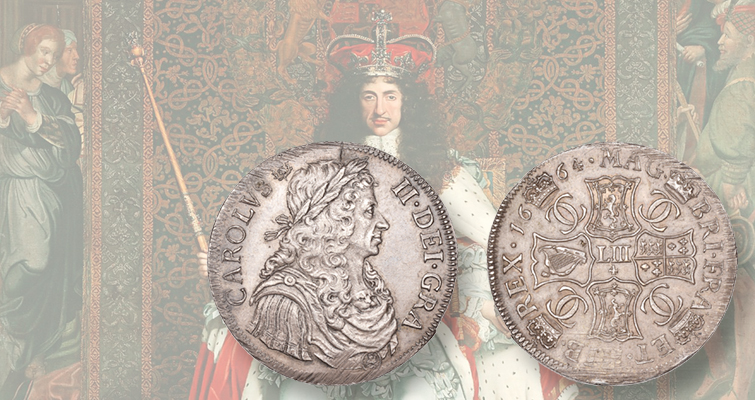 The first dedicated coinage of Scotland marked the debut of milled coinage for Scotland, and the first specific coins intended for circulation there. This silver 4-merk coin highlights a Sept. 15 auction in London.

When Charles II returned to the throne in 1660, it signaled the beginning of a new era in Scottish coins.

Following Charles II’s restoration to the monarchy, Scotland issued its first conventional milled coins (after some earlier, abbreviated efforts), adopting and adapting practices that were finally embraced in London’s Royal Mint beginning in 1662 and continued for several years.

An example of this first coinage, a silver 4-merk piece, highlights Dix Noonan Webb’s Sept. 15 auction of Scottish silver coins and tokens, from the collection of the late Harrington Manville.

Though Charles II was king of England and also ruled Scotland, Scots had a slightly different monetary system at the time than that used in England.

During Charles II’s exile, no separate coinage was specifically issued for use in Scotland, but that situation also changed after his return to the throne.

The basis of Scotland’s milled (machine-struck) monetary system was the merk, which would later serve as the basis of the Scottish quarter dollar introduced in legislation in 1675. Coins in 4-, 2-, 1- and half-merk denominations were issued after receiving approval at various points in 1663 and 1664.

The punches for the 4-merk coin were prepared in London, but the dies were made at the newly reopened Scottish Mint.

Charles II appears on the obverse, with a tiny thistle (a Scottish symbol) to the left of his head.

The face value is noted at the center of the reverse as LIII 4, indicating the coin was worth 53 shillings and 4 pence in the Scottish system.

The silver coin weighs 26.84 grams and features adjustment marks on both sides (indicating that the planchet had to be corrected to reach the intended weight).

Despite a small scratch above the head and a tiny flaw in the Irish shield, the coin is “otherwise Extremely Fine,” according to the auction firm, and is very rare, especially in this condition.

The coin is “almost certainly the finest specimen available to commerce,” the firm said.

Its provenance dates back to the Bridgewater House Collection, sold by Sotheby Auctions on June 15 and 16, 1972, when it realized £310.