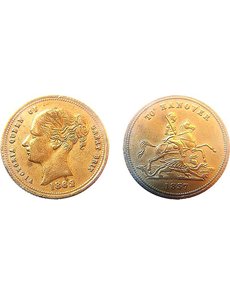 Reader submits what is likely a British gaming counter, often called a “Hanover Jack,” depicting England’s Queen Victoria on its obverse and a representation of her uncle, the Duke of Cumberland, on the reverse.

To know with certainty, Mr. McClelland would need to have the piece examined by an exonumia expert; however, the piece in question appears likely, solely judging by the images, to be a 19th century British gaming counter or token, often called a “Hanover Jack” or “Cumberland Jack.”

If indeed authentic, this gaming counter isn’t composed of gold, but more likely of brass or copper. As well, it is a privately produced item, therefore not technically qualifying as a “coin” as is usually struck by a governing authority to be accepted as legal tender.

The obverse side of the token, dated 1862, portrays Queen Victoria and the legend victoria queen of great brit. The reverse shows a man on horseback, a three-headed dragon, the date 1837 and the legend to hanover.

This piece, and others like it, has an interesting history as explained in an article written by Frank G. Holstine for the February 1968 TAMS Journal (Vol. 8, No. 1), the official publication of the Token and Medal Society.

Holstine writes: “The Kings of England, starting with George I, were also Duke or King of Hanover and Elector in the Holy Roman Empire. When Victoria became Queen in 1837, the German law did not permit a woman on the throne of Hanover. Her uncle, Ernest Augustus, Duke of Cumberland and fifth son of George III, became King of Hanover. This is known as Salic Law.

“The To Hanover Tokens are said to represent the Duke of Cumberland departing from England on horseback, riding over a one, two or three headed dragon. The inscription ‘To Hanover’ appears above and the coronation date, 1837, often appears in exergue. However, other dates do appear in exergue.”

Holstine writes that the tokens were “... hoarded by people of moderate means in the hope that they would become valuable in the future. Nobility collected rare regal coins while the poor people were able to collect only the tokens sold by the street-sellers at a cost of a penny for four.”

Based upon the illustrations and descriptions provided by Holstine’s article, McClelland’s piece (if authentic) looks similar to the example listed as an “E-3” — with the obverse described as “Straight nose; legend broken; large date, 1 in date nearly touches truncation; 1862.” The reverse is described as having a “Long blunt scabbard; sword tip even with top of crown; medium date centered; 1837.”