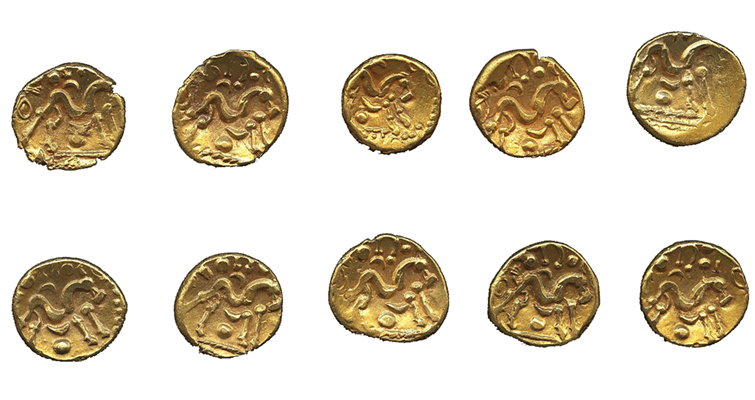 A hoard of 10 gold coins was found in 2016 a quaint village in Great Britain. The obverses of the staters in the hoard appear here.

Image courtesy of the Trustees of the British Museum. 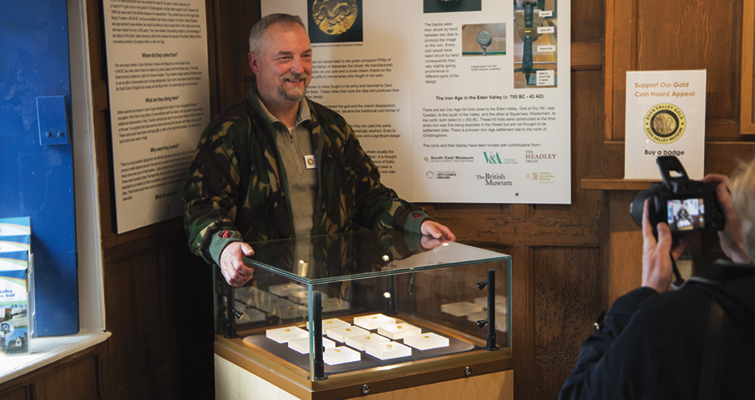 Jonathan Barber is the treasure seeker who found the hoard. 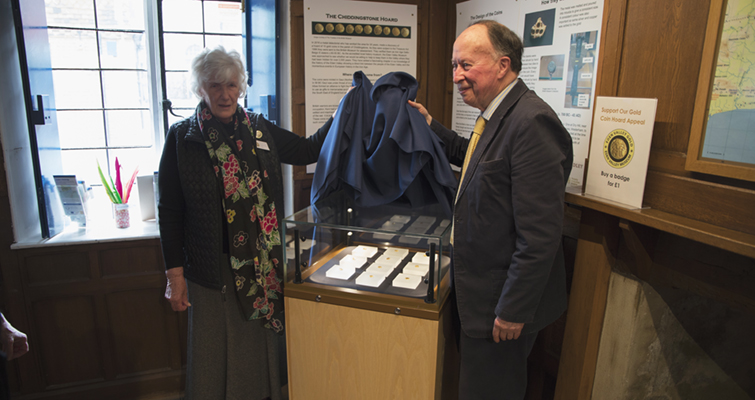 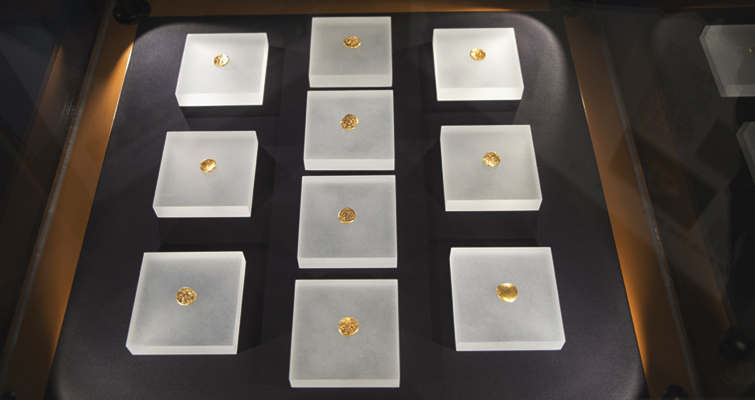 The Chiddingstone Hoard in its permanent display case at Eden Valley Museum.

As coin hoards go, it is on the small side, but it caused a considerable amount of excitement locally. This is a story that shows what a local community can do when there is a museum with a band of very enthusiastic volunteers.

From Oct. 30 through to Nov. 6, 2016, Jonathan Barber was exploring a farmer’s field near the village of Chiddingstone with his metal detector. By Nov. 6 he had found 10 late Iron Age gold coins.

Although the exact location is not being revealed, Chiddingstone is one of the most beautiful and oldest villages in Kent County in southeast England, with its single street having an abundance of Tudor dwellings, all of which are owned by the National Trust.

The village is home in particular to a house in the Gothic style set in 36 acres that, in the early 19th century, replaced a dwelling dating from the 16th century. This site was then renamed Chiddingstone Castle. During World War II it hosted members of the Canadian forces before becoming Long Dene School.

Denys Eyre Bower, a former bank clerk who became an antique dealer in London’s Baker Street, acquired it in 1955 as a home for his collections.

But Bower was arrested two years later for attempting to murder his girlfriend and commit suicide. He was released from prison in 1962, his solicitor having proved there had been a miscarriage of justice.

When he died in 1977, Bower left the castle and the contents to the nation and it is still home to his collections and is a wedding and event venue as well. The village is near the historic market town of Edenbridge located 35 miles south-southeast of London in the upper valley of the River Medway. The River Eden is a tributary of the Medway.

Because Barber, the finder of the 10 coins, lived in the county of East Sussex, he reported the discovery to his local finds liaison officer of the Portable Antiquities Scheme.

The Portable Antiquities Scheme is run by the British Museum and the National Museum of Wales to encourage the recording of archaeological objects found by members of the public in England and Wales.

Ahmet learned that the coins had been discovered at a depth of 3 inches over a wide area, indicating that they had been scattered by a plow.

Barber has been using his metal detector on the find site for many years, but the area had recently been deeply plowed, bringing the coins nearer to the surface. Ahmet took possession of the coins and arranged for them to be examined by the Portable Antiquities Scheme at the British Museum.

The coins were identified by Dr. Andrew Brown as being “Gallic War uniface” staters. They were struck by the Ambiani in northern France almost certainly during the Gallic War period (circa 60 to 50 B.C.) and imported into Britain during the late first century B.C.

While each reverse features a stylized horse facing to the right, the obverses are blank. Although Celtic staters are frequently found in southern England, hoards of these particular staters are rare. Indeed, since 1996, the year the Portable Antiquities Scheme was launched, this is only the second hoard of Gallic War uniface staters to have been reported to the PAS.

In February 2017, Ahmet gave details of the find to the Eden Valley Museum in Edenbridge, which is the nearest to the find site. Immediately the museum made it clear that it would like to secure the Chiddingstone Hoard when the formalities had been completed.

The museum is relatively new, as it was founded after a 1995 exhibition marking the centenary of the local council. This was organized by the Edenbridge and District Historical Society.

The Eden Valley Museum Trust was established in 1997 and was granted charitable status. With the aid of a grant from the Heritage Lottery Fund, the museum opened in 2000 and is located in a Grade II listed timber-framed house dating from 1380 to 1410.

Originally an open hall house, it was extensively rebuilt during the 16th century to give it a chimney and first floor. The frontage was clad in brick during the late 18th and early 19th centuries. Until 1913 the dwelling was known as Doggetts Farm. Miss Rickards of the adjoining Rickards Hall, merged the two properties and in 1921 gave the enlarged building to the Parish Church for community use. Today it is known as Church House. The Museum leases the building from the local council.

When the formalities regarding the hoard were over, the Eden Valley Museum was offered the chance to buy the hoard.

Claire Donithorn, resident archaeologist at the museum, said: “We leapt at the opportunity. This is our first significant Iron Age exhibit. The coins date from precisely the time when Britain emerged from Prehistoric to Historic Times. Our aim was to keep the hoard together and to ensure that it stays in the Valley for us and for future generations. These coins are an important part of the history of the Eden Valley. They show that the Valley was connected to great events in European history — the Gallic Wars. Whoever buried them may have been involved in those wars and was probably living here in the Valley.”

As we have already seen, while the establishment of the museum was made possible by a grant from the Heritage Lottery Fund, its collections were mainly formed by accepting artifacts from all and sundry. Its determination that the hoard should return to Eden Valley meant that the museum was entering into the world of commercialism.

When a find is declared to be treasure, the objects are put before an independent Treasure Valuation Committee comprising unpaid experts who determine an open market valuation between a willing buyer and seller. Should a museum wish to purchase the find, this is the sum they have to pay. The money is usually split equally between the finder(s) and the land owner(s). If a museum does not want the objects found, then they may be sold on the open market and the proceeds split between the finder(s) and land owner(s).

Of course, acquiring a find is not an end in itself. The museum was adamant that the hoard should go on permanent display. This requires a secure display cabinet. It was estimated that the total outlay for the hoard and the display case would be £13,000 (about $18,172 U.S.). The fact that the find comprised just 10 coins was advantageous to the museum. Had it been 100 coins, the cost would have probably been out of its reach.

The museum secured £11,315 from the South East Museums Development Programme, The Headley Trust Archaeological Purchase Grant Fund and The Arts Council England/Victoria and Albert Museum Purchase Grant Fund, which is a government fund that, among other things, helps regional museums.

The museum raised part of the remaining £1,685 by selling badges for £1 and appealing for cash and online donations. To actually pay for the hoard, the museum had to call upon its reserves. The fundraising continues, to replenish those reserves. In addition to donations there will be various events, including talks.

The hoard was ceremonially opened on April 7. Jonathan Barber, the finder, was present with his metal detector and, as well as telling the story of his discovery, he answered questions on treasure hunting generally.

Ahmet gave a talk on the Chiddingstone Hoard and the Portable Antiquities Scheme in Kent. The hoard was open for public viewing on April 11, 2018. 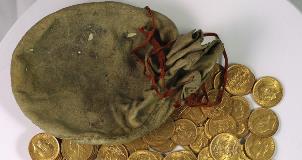 The gold piano hoard gets recognized as a treasure 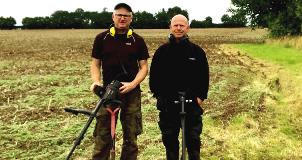 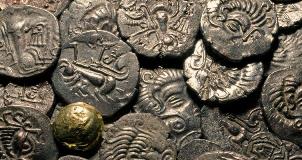