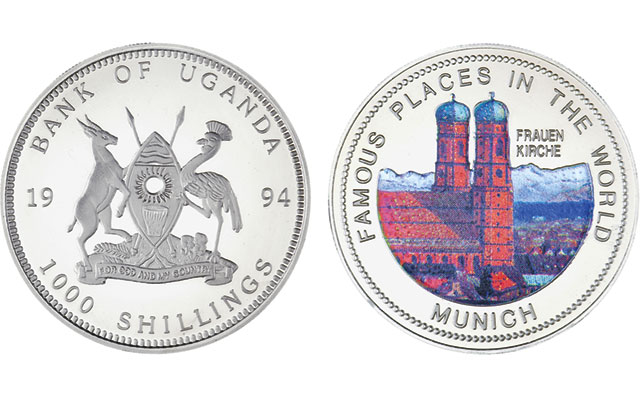 This 1994 Uganda copper-nickel 1,000-shilling coin has the exact same reverse design as Uganda’s 1993 coin featuring Munich in the “Famous Places” series, including the color on the reverse. The obverse designs differ, however. 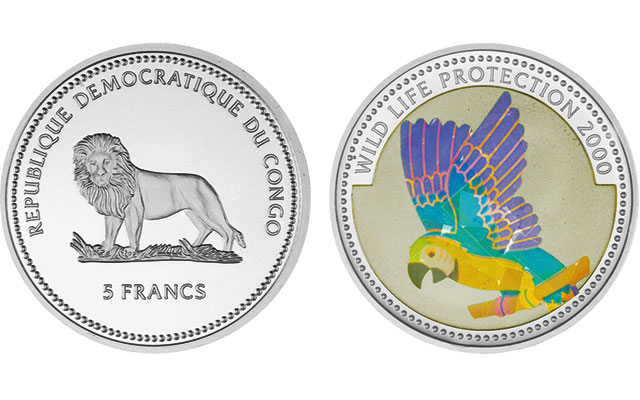 One major coloring process involves using appliqués. Part of a series from the Democratic Republic of Congo that ran from 2000 through 2005, this Wildlife Protection colored hologram or prism 5-franc coin features a parrot with wings open. The reverse side is smooth, because a clear acrylic appliqué was applied over the prism appliqué. On the obverse, the raised design is not covered and can be felt. 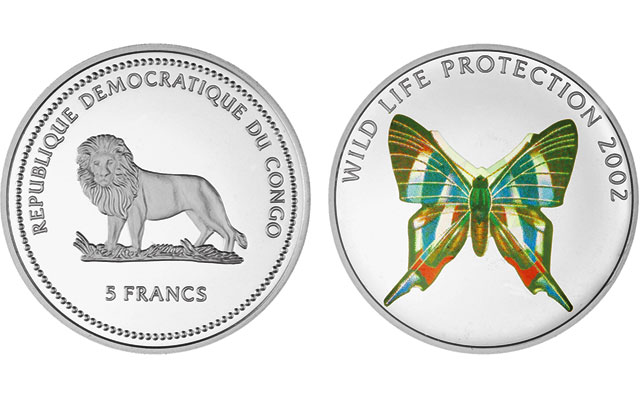 Part of a series that ran from 2000 through 2005, this Wildlife Protection colored hologram or prism 5-franc coin features a butterfly. The reverse side is smooth because a clear acrylic appliqué was applied over the prism appliqué. On the obverse, the design is raised and can be felt. 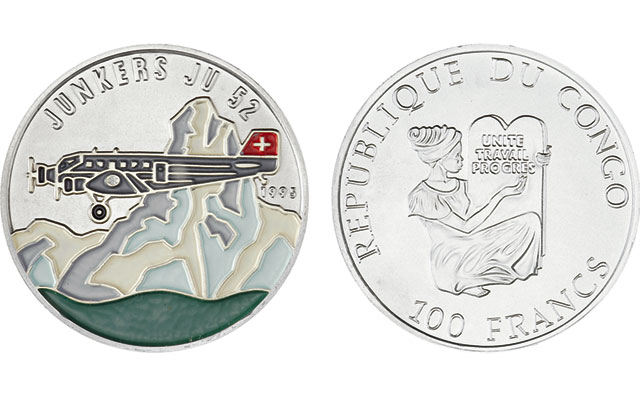 This coin is an early example created by the third major process for coloring coins, developed by the Cuban Mint in the early 1990s. Raised cells in the design are hand-filled with different colors of paint in a cold enameling process. This type of process is a favorite among colored-coin collectors. The design features vintage aircraft — in this case, a World War II German-made plane called the Junkers JU-52.

Editor's note: This is the third part of a multi-part series prepared by Rita Laws for Coin World's February 2015 monthly issue about the world's first mint-colored coin.

As technology advances, we may see totally new methods of coloring, but for now, there are three basic types.

The simplest and least expensive involves the use of a colorful appliqué that is adhered to the surface of the coin. Palau, Malawi, Zambia, and Liberia  have issued appliqué coins, among others. Some have an artistic look while others are made to resemble miniature photographs. A few call their appliqués prismatic, but collectors often refer to the pieces as hologram coins.

The next type involves coloring a surface by way of a computerized process using ink or paint. The British Virgin Islands, Isle of Man, Canada, and Australia are just a few of the nations issuing this type. The Australian mints call it “colour printing.” The effect is not as flat-looking as an appliqué, and most collectors prefer it to coins with appliqués.

However, the third type is the most popular with collectors. The final process type is also the most labor-intensive and expensive process. The resulting colored coins are called enameled coins.

Most people think of enameling as the ancient process of filling cells with colored silica and firing the items, adding multiple layers to achieve a smooth shiny surface. However, mint-enameled coins are more likely to be made with a cold enamel process involving one or more layers of paint. As with the Cuban process, cells on the surface of the coin are filled with different colors. The results are brighter, leaving designs with more detail and more of a “wow” factor. They resemble miniature oil paintings.

Today, this enameled look can be found on coins issued by Afghanistan, China, Canada, France, and Bulgaria, among others. The last three countries have described some of their enameled issues as “hand-enameled.”

When the coloring is translucent, the effect is that of stained glass. Canada has issued several translucent enameled commemorative coins using a process of its own invention.