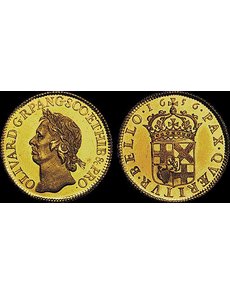 Oliver Cromwell won the English Civil War, but after his death a movement to erase his memory from public consciousness led to destruction of many of his coins, including the 1656 gold pattern 20-shillings or broad. Graded Proof 63 Cameo by Numismatic Guaranty Corp., this example has an estimate of $40,000 to $60,000. 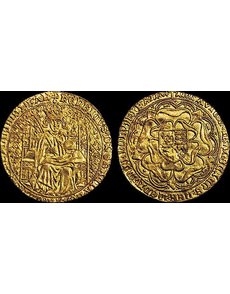 The gold sovereign that many collectors know today debuted centuries after the denomination was born during the reign of Henry VII. Law’s collection included four of the five types of the denomination issued under Henry VII, including the Type One example here. 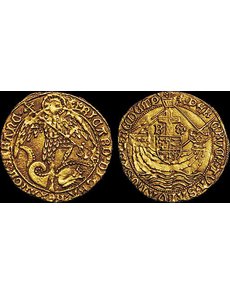 Legend suggests that Richard III had his nephew deposed so he could claim the throne in 1483. Only a few years later, he died during the Battle of Bosworth Field. His short reign and the intrinsic value of gold are two reasons his gold angel is rare today. This example has an estimate of $8,000 to $10,000. 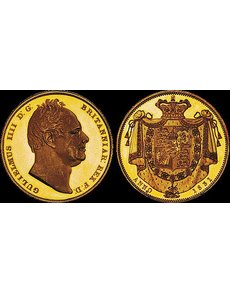 William IV’s reign was short, and in 1831 included the curious production of gold crown pattern coins, a denomination normally struck in silver, but no silver crowns were struck in 1831. Specialists regard the gold pattern as a £5 coin for its size and metal. Its presale estimate is $125,000 to $175,000.

When collector and exhibitor Thos. H. Law decided to sell part of his world coin collection in 2001, he just couldn’t bear to let some coins go.

Law, an aficionado of English gold coins, amassed a collection of that specialty that was described by fellow hobbyists as one of the most extensive and complete in the Western Hemisphere, rating only behind the holdings of the British Museum and a collection in Belgium. (The Millennia Collection sold in 2008 may now outrank Law’s group.)

So one can understand Law’s reluctance to say goodbye to those 450 or so coins when he stopped exhibiting his coins in 2001 after a record-setting run that saw him earn an unprecedented five best-in-show awards at American Numismatic Association conventions over an 11-year period.

Nearly seven years after he died at the age of 88, his collection of British gold coins is scheduled to be auctioned at the ANA World’s Fair of Money convention, in the official auction from Stack’s Bowers Galleries in August.

Law of the land

The collection, bearing coins dating from the 14th century to the late 20th century, provides a tangible perspective into the 700-year history of British gold coins. It is a pictorial history of English gold coins by denomination and includes many great rarities.

Acquired over four decades, the coins in the specialized group served as the basis for 10 first-place exhibits at ANA shows, and a museum exhibition at the ANA Money Museum in Colorado Springs, Colo., in 2002.

According to the ANA, Law began collecting coins as a youth, pulling Indian Head cents from circulation. A native Texan, Law became acquainted with noted Fort Worth coin dealer B. Max Mehl, from whom he purchased many coins.

Law’s military service in the Pacific on an aircraft carrier during World War II contributed to a lifelong interest in travel that took him and his wife, Jo Ann, to more than 80 countries, where often he was able to acquire genuine gold coins for his collection. Those coins were sold in 2001 by Stack’s. While interesting, none were of the quality, rarity or value of the British gold coins returning to the market this August.

The collection encompasses an incredibly diverse variety of coin types, from hammered pieces emitted by Edward III (1327 to 1377) — which are the first unified British gold coins — to modern-day coins of Elizabeth II (1952 to the present).

The denomination whose name comes from an element on the design, the gold angel of Richard III was worth the equivalent of 6 shillings and 8 pence when it circulated.

St. Michael appears on the obverse, with a ship sailing across the reverse. Richard III rose to power in 1483 after having his predecessor, Edward V (the Boy King, his nephew), deposed and, legend has it, locked in the Tower of London.

Richard III’s reign was cut short when he died in 1485 at the Battle of Bosworth Field. Consequently his coinage issues are rare, the angel exceedingly so.

The example in the Law collection grades Extremely Fine and has a presale estimate of $8,000 to $10,000.

The coinage of Henry VII marked the transition from medieval to modern coinage. The Battle of Bosworth Field, where the House of Lancaster defeated the House of York, ended the War of the Roses, allowing the Tudor reign to the coin transition to begin.

In 1489 a new gold coin debuted — the sovereign. More than 500 years later, the coin (with a different design dating to 1817) remains an integral part of British coinage.

The Law Collection features four of the five design types of Henry VII, each with a slightly different design style. All show the king seated on King Edward’s Chair (the Coronation throne) on the obverse paired with the Tudor rose and arms on the reverse.

“These early sovereigns can boast of an artistic achievement never before realized on an English coin, and perhaps never since,” according to English Gold Coins Ancient to Modern Times, published by the Cleveland Art Museum.

The English Civil War pitted pro-royalist forces against Oliver Cromwell and the pro-parliamentary group, with Cromwell emerging victorious to govern the Commonwealth as Lord Protectorate.

In 1656 the broad or 20-shilling pattern coin was created, depicting Cromwell on the obverse. The use of his portrait reinstituted an earlier tradition of placing the monarch’s image on the coin obverse.

The dies were created by famed engraver Thomas Simon, and the patterns struck, using a screw press, by Pierre Blondeau, the Frenchman who jealously guarded the secret to adding edge lettering to the coins. Experts debate whether these were true patterns, as circulated examples exist, but the image of Cromwell apparently rankled the citizenry and full-scale production was abandoned.

After Cromwell died in 1660, the monarchy was restored and Cromwell coinage was recalled to be recoined. Little survived.

William IV’s reign lasted only from 1830 to 1837 but was the subject of numerous gold patterns, one notably an 1831 pattern crown struck in gold.

The crown denomination was worth 5 shillings and struck from silver, so the issue in gold is unaccounted for — in addition, no silver crowns were struck for circulation in 1831. However, collectors have long referred to the gold patterns as £5 coins (because of their size), though no coins of that denomination were issued during William IV’s reign. One estimate suggests between six and 10 examples of the pattern are known. Law purchased this example in 1984 from Spink & Son for £39,000. It is currently graded Proof 63 Ultra Cameo by NGC, and is the only example certified by that service.

How extensive is Law’s collection?

In addition to the cited highlights, it also features two examples of the Una and the Lion £5 pattern, and two triple unite pieces of Charles I, along with numerous other gems.

Multiple varieties of the Una and the Lion coin exist, all engraved by William Wyon and showing Queen Victoria, on the obverse, with the young queen on the reverse as the mythical Una who is befriended by the lion, long a symbol of Britain.

Experts do not detail how many triple unites may still exist, but the coin is one of the great rarities from the English Civil War. The largest gold coins of England to that point, they were struck at two provincial mints for use by the king, and most were melted after the war.

Lot descriptions and images will be available for viewing online on www.StacksBowers.com, the firm’s website, beginning in July.

For more information or to bid or receive a catalog, email the firm at auction@stacksbowers.com, or phone it at 800-458-4646. ¦