This Day in History: March 16 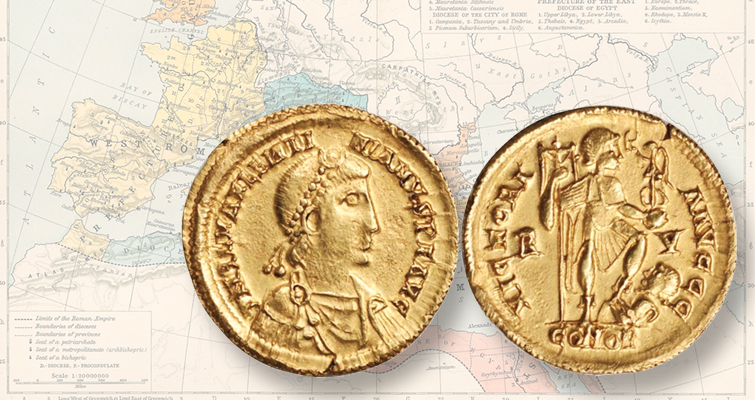 This gold solidus was issued early during the reign of Roman emperor Valentinian III, who was assassinated on March 16, 455.

The Roman emperor Valentinian III, who rose to the throne at the age of 6, was assassinated on March 16, 455.

Flavius Placidus Valentinianus, the only son of Constantius III and Galla Placidia, belonged to the Theodosian family thanks to his mother, who would play a pivotal role in guiding the young ruler.

According to David Vagi, in Coinage And History of the Roman Empire, “Though his political legacy lie in the West, he spent his early years in exile in Constantinople with his mother.”

Hailed caesar on Oct. 23, 424, at Thessolanika after the overthrow of Johannes, he took the throne when the eastern fleet defeated the deposed ruler in May or June of the following year.

Trouble in the east arose when Valentinian III’s cousin, Theodosius II, died in 450 and a soldier named Marcian was appointed his replacement by Theodosius’s widow, without the consent of Valentinian III. Although the appointment was flagrantly unconstitutional, there was nothing the western ruler could do.

His reign was marked by the expansion of Vandals to North Africa, which would eventually lead to their invasion of Italy and sacking of Rome shortly after Valentinian’s death.

The other main adversary for Valentinian III was Attila the Hun, “whose mounted warriors had unraveled Roman security in both the East and the West,” wrote Vagi, before Attila died of natural causes in 453.

“Just when Valentinian had rid himself of Attila and had grudgingly acknowledged Marcian, another foe emerged from within his ranks,” according to Vagi.

Master of soldiers Aetius threatened Valentinian III and his chamberlain, so the ruler personally murdered his prize soldier with a dagger.

Less than a year later, Valentinian III was assassinated, 1,561 years ago today, by two of Aetius’ former bodyguards to avenge their leader's death.

This cleared the way for Petronius Maximus, who had either arranged or encouraged both murders.

“Valentinian’s reign was yet another signpost in the decline of the Western Roman Empire, and constituted the extinction of the Theodosian line in the West,” wrote Vagi.