This Day in History: March 15 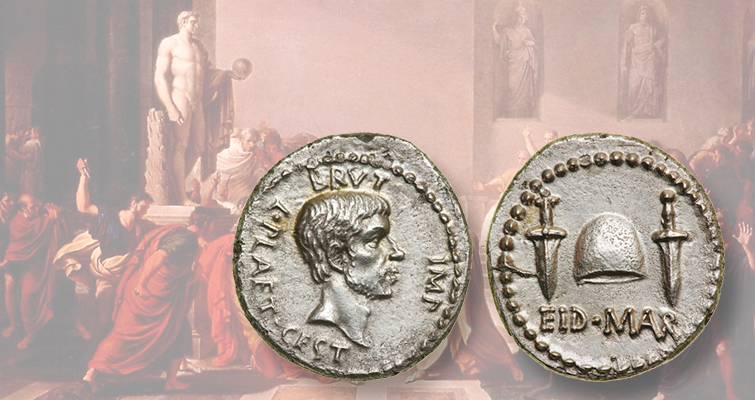 The “Eid Mar” silver denarius from 42 B.C. may be the most famous ancient coin ever.

The coin was struck to commemorate the March 15, 44 B.C., assassination of the megalomaniacal dictator Julius Caesar.

After being proclaimed imperator, Brutus began issuing coins to pay his army. The Eid Mar coins of mid-42 B.C., with the pileus or cap of liberty between the daggers that executed Caesar, is Brutus’ final coinage type.

The design is notable for the ironic appearance of a portrait of Brutus. “Caesar, a mere two years earlier, had been the first Roman to place his own portrait on Roman coins, and that was just the sort of monarchical innovation for which he had been assassinated,” Berk wrote.

Eid Mar denarii are rare today because the type was deliberately recalled and melted down by the victors of the second battle of Philippi on Oct. 23, 42 B.C., Mark Antony and Octavian.

An estimated population of some 80 examples was known in 2008 when Berk’s book was published, “but many more than 80 people want one of these coins and can afford the $100,000-plus price tag.”

Even very worn examples, in Good Fine condition, can sell for around $50,000, though some cost less. What is believed to be the finest example known realized $546,250 in a 2011 Heritage Auctions sale, a record price.