The world is changing 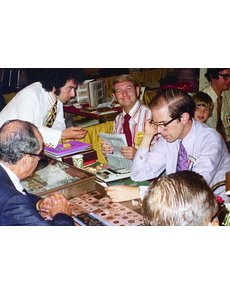 The author, right, at the 1972 ANA convention. This was an ancient time — no computers, no electronic pricing, no certified coins. Back then, it took skill and experience to be a professional numismatist. Have we lost something since then?

As I write these words I’ve just returned from the Florida United Numismatists convention, held in Tampa Jan. 6 to 9. The usual venue is Orlando, but accommodations were not available in that city this year.

I hadn’t been to a FUN convention since 2005, as I have been in New York City instead. By circumstances that I can’t figure out, the annual New York International Numismatic Convention at the Waldorf-Astoria Hotel and American Numismatic Society Gala are also held the first week of January, and I have not been able to be in two places at the same time.

I don’t know if my comments on the “graying of the hobby” made in this column last summer rank as one of the top 10 stories of 2010, but certainly a lot of feedback has resulted. At the FUN show, Alan V. Weinberg, a friend for perhaps 50 years and a frequent contributor to Coin World, gave me a letter to the editor of the Maine Antique Digest, January 2011 issue, from Dan Sullivan, of North Bellmore, N.Y. Under the title of “Young Collectors,” he stated that as a son of a dealer in antiques, he had witnessed the scarcity of young buyers in that field of antiques as well — not much different from rare coins.

“Young people have little or no time to devote to the arts and collections. These are practices for those who have money and time to spare,” Sullivan commented. He observed that no longer is a college degree the passport to success and security in later life. The “all-American job” no longer exists. No security exists anymore, and without a sense of security it is difficult to start collecting antiques. And, I might add, “or coins.”

Alan told me that one of his acquaintances, college degree in hand and with an excellent academic record, has not been able to find work to match her ambition and is now waiting on tables.

The world is changing. Computers do a lot that used to require trained people. Computers, with a little bit of human assistance, can design skyscrapers, buy and sell securities, fly airplanes and build SUVs. And, as I have mentioned in this column, what with certified coins and electronic pricing, even a monkey can be a coin dealer. Well, almost.

The point is that the human element is being lost in many areas. As I see it, collecting coins (and antiques and similar items) is an escape from computers, as the personal aspect is still there. And, all day long at the FUN show I greeted lots of real people, fun to do. I had a good time, while my laptop computer remained in my briefcase.