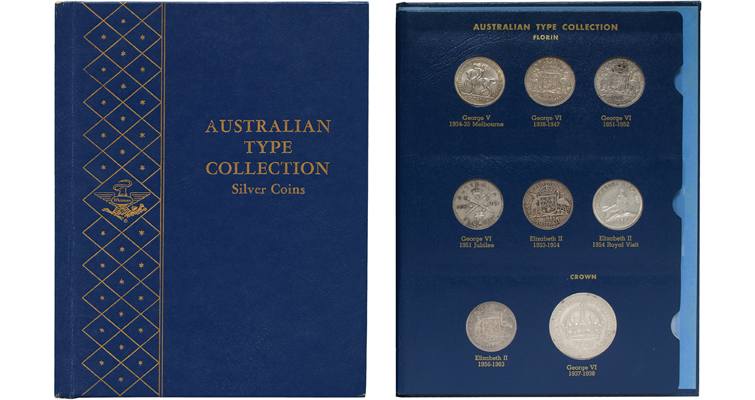 Australian type set albums can be made for silver coins alone, like this Whitman album, or coins of different metals. Some will hold the coins of only one denomination. In this album, the highlight is the rare silver crown, minted only in 1937 and 1938. 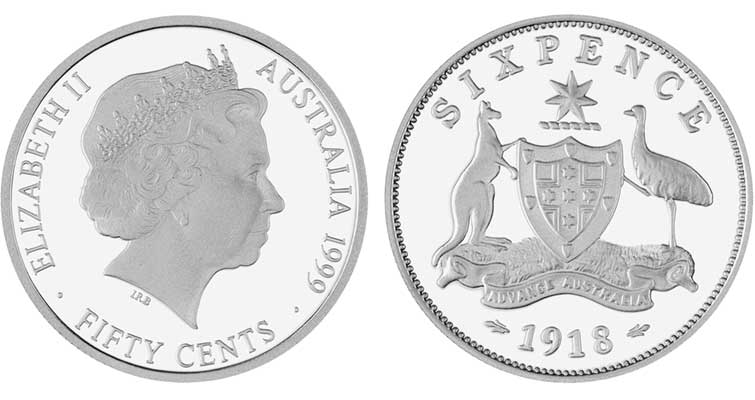 So beloved is the Australian silver sixpence, it was brought back for an encore in 1999. The 1918 design was repeated on a sixpence-sized Proof silver coin with dual dates and denominations. 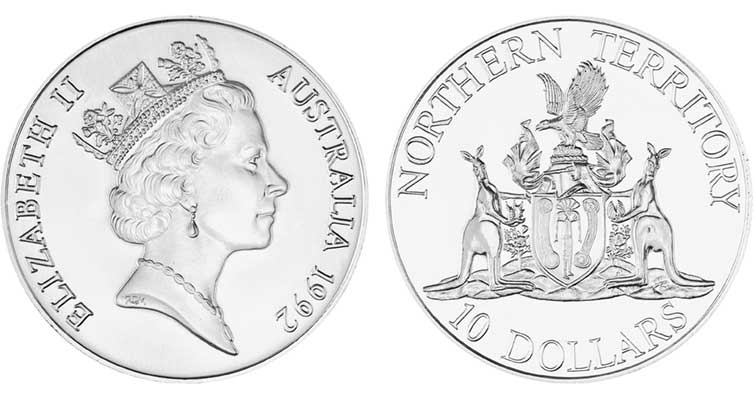 Before Canada’s 1992 provincial 25-cent coin series, Australia celebrated its states and territories with a silver $10 coin series. The series issued one new coin each year between 1985 and 1993. This is the 1992 issue for the Northern Territory. 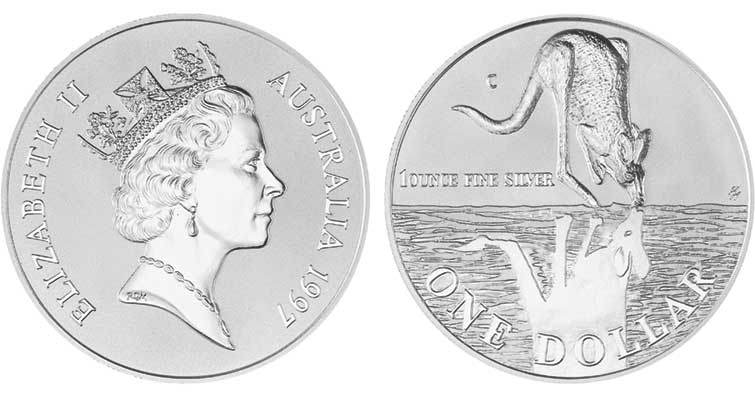 Kangaroos have appeared on Australian silver coins since 1910 as part of the national crest or as a stand-alone element. This 1997 silver dollar shows a ‘roo drinking from a watering hole over its own reflection. 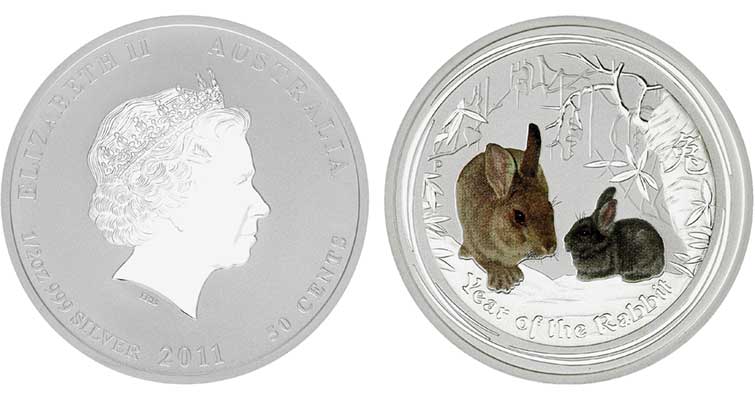 This 2011 Lunar Year half-ounce silver 50-cent coin uses mint-applied color and a variety of silver polishing techniques to bring out the design on the reverse celebrating the Year of the Rabbit. The Chinese character for “rabbit” is engraved off to the right side, on the bamboo stalk. 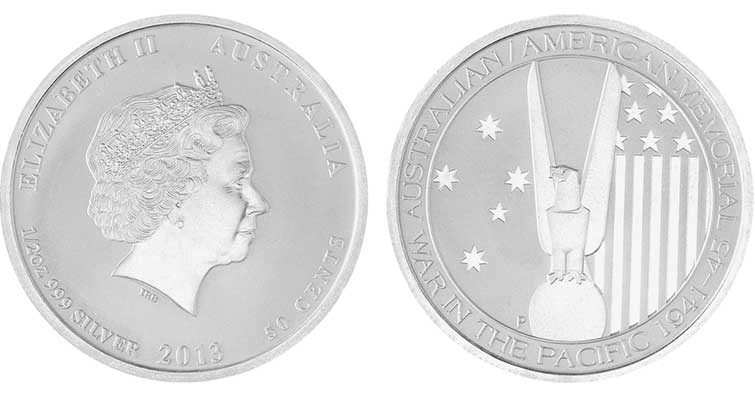 In 2013, Australia commemorated a very important alliance with the United States of America. This 50-cent coin celebrates the Australian-American War in the Pacific Memorial honoring the years 1941 to 1945. The prominent P Mint mark stands for “Perth” (not Philadelphia.) 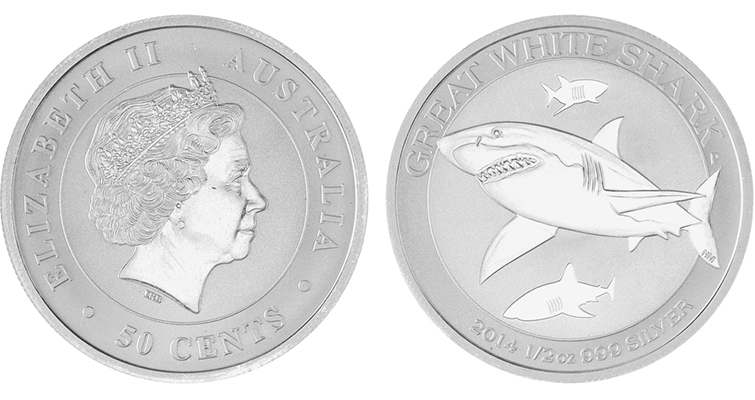 The 2014 Great White Shark silver 50-cent coin is an example of a legal tender bullion piece with an interesting design. Silver is referred to as the “white” metal, making it a particularly appropriate vehicle for this creature of the seas. 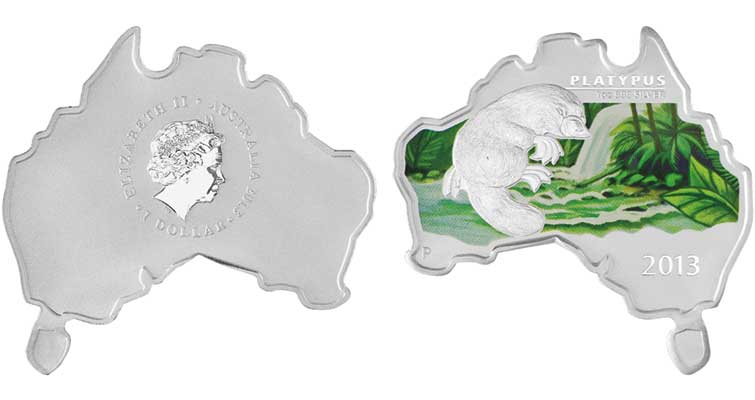 This 2013 dollar is shaped like the nation of Australia itself and resides within a custom capsule of the same shape. Different silver finishes highlight the platypus, the central design element, and various shade of green highlight the landscape.

The wizards at the Royal Australian Mint and the Perth Mint really know silver. Thanks to large deposits of the shiny metal, Australia has a long history with silver coinage. Collectors have taken notice. On eBay, for example, the “sold listings” show that more Australian silver world and bullion coins are sold than the issues of any nation except the United States and Canada.

Nicknamed “Oz” almost a century ago, Australia was one of the last nations to remove the silver from its circulating coinage. This was accomplished in 1966 when the nation also switched over from a currency based on pounds and sixpence to a decimal dollar system. The exception was the large 1966 50-cent coin that was composed of 80 percent silver, but only in its debut year.

During the 20th century Australian coinage was so popular with world collectors in the United States of America, that Whitman and Dansco sold folders and albums designed for Australian coins.

Collectors could choose between books for a specific denomination like threepence or shilling, or they could buy a type set book that covered a range of coin types. There was even an album offered just for collectors of Australian silver type sets. The scarce crown, minted only in 1937 and 1938, is the highlight of this album.

Before decimalization was achieved, the sixpence was to the pound what the dime is to the dollar, the foundation of the monetary system.

In 1999, the Royal Australian Mint issued a dual date and denomination commemorative silver coin to honor the beloved sixpence. Looking otherwise exactly like the 1918 original, it was denominated as a 50-cent coin, and was part of the Masterpieces in Silver set.

In 1985, Australia began a new eight-year silver coin series designed to honor each of its six states and two major territories with a $10 coin.

Each reverse displayed a unique crest or seal. The last of the eight .925 fine silver coins was issued in 1993. This was one year after the launch of Canada’s successful 12-piece 25-cent coin program honoring its territories and provinces that itself became one of the major inspirations for the United States’ State Quarter series.

Kangaroos are synonymous with Australia, as evidenced by the minting of many different silver ‘roo coins since 1910.

These unique animals can be seen on circulation coins, bullion pieces and Proof coins, and in designs that are gilded, frosted, mint-colored, and stylized.

Kangaroos have appeared on silver coins as opal gemstone inserts, and as Aboriginal dot art. Kangaroo designs issued first in 1997, 2009, and 2012 have attracted a special following because of one simple but elegant element, a reflection. They show a kangaroo drinking from a reflecting watering hole, one running across the horizon at sunset with a long shadow of the animal following close behind, and a kangaroo jumping across the outback, chased by its shadow.

The Royal Australian Mint is not the only Australian mint to issue coins that are innovative and creative, or not shy about using color to enhance a coin’s design. Sometimes, most or all of a reverse surface will be colored, but sometimes color is used very selectively.

The latter is true in the case of the Perth Mint’s 2011 Lunar Year silver 50-cent coin celebrating the Year of the Rabbit. In addition to color, different silver polishing techniques were used to enhance the design.

Australia uses its silver coinage to celebrate close ties with other nations.

In 2013, a 50-cent bullion coin was issued by the Perth Mint to commemorate the Australian-American Memorial in Canberra. The monument shown on the coin was erected in 1954 to honor America’s sacrifices in World War II in the Pacific. This is a rare example of a non-U.S. coin that features the U.S. flag in its design.

Australia’s bullion coins are always interesting. One is even a bit menacing.

The 2014 Great White Shark 50-cent coin (also struck by the Perth Mint) shows a trio of the magnificent animals. The largest is wearing a grin that could be described as very toothy. This coin is a reminder that Australia’s amazing animals are not all land creatures.

Australia has issued silver coins with a hole in the middle, and coins in the shape of a square, rectangle, and triangle.

Since 2012, the nation’s most iconic animals have appeared on a mint-colored map-shaped silver series from the Perth Mint. So far the following animals have been feted: kookaburra, emu, platypus, kangaroo, saltwater crocodile, koala, and wedge-tailed eagle. In a unique twist, the coin capsule is a custom fit, also shaped like the world’s smallest continent and largest island.