The story within a story 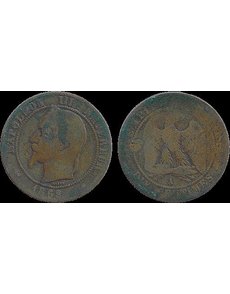 This French 10-centime coin was carried as a pocket piece by the author’s grandfather and father. Coins of the same kind were used as “gold” coins in a recent movie based on the Victor Hugo novel of the same name, Les Miserables.

A familiar coin flashed before my eyes while watching the movie version of Les Miserables this winter.

A scene that purports to show a pile of early 19th century French gold coins shows no such thing.

The coins on the screen bear the profile of a bearded man in the center of a circle of dots. I knew the coin immediately. I played with the same type of coin as a child and treasure it now in my later years.

When I was a boy, my dad carried one in his pocket, though I didn’t know what it was at the time. His father had kept the coin as a pocket piece before him.

The reverse, with its eagle design, was worn nearly smooth from almost a century of jangling in my grandfather’s and then my father’s pockets, along with God knows how many Seated Liberty, Barber and Indian Head coins.

I imagine my grandfather had the coin in his pocket when he worked as a telegrapher in western Ohio at the turn of the last century, perhaps picking it up from a passing immigrant on the railroad.

My father acquired it at the death of his father at the start of the Great Depression.

I latched onto the coin before my father died 40 years ago, but don’t recall exactly when.

I do remember dripping wax on it from a lighted candle as a child to “preserve” it. It still has a slippery feel, so I guess the preservative worked.

Still visible on the obverse is the image of a bearded man within a circle of dots. Also visible is the legend: NAPOLEON III EMPEREUR and the date 1862.

That date, coincidentally, is the year Victor Hugo published the book on which the play and movie are based.

Only the center part of the eagle and parts of a few scattered letters are visible on the reverse. The single letter A is clearly visible below the eagle.

Foreign coin catalogs were hard to come by in the 1950s and 1960s when I was a child and provided only rudimentary information.

With the help of Fred Reinfeld’s Catalogue of the World’s Most Popular Coins, I was able to puzzle out that the coin was a French 10-centime piece. Later I was able to identify the A as the Paris Mint mark.

The coin, which is worth no more than a dime, is a cherished part of my collection, perhaps more valued than any other piece.

As collectors we prize coins that come with stories. And no stories are as good as the ones that involve family.