The price for freedom 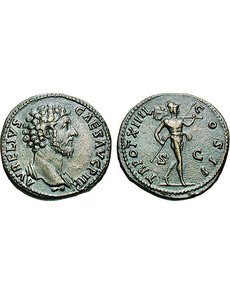 It took four bronze sestertii, like the one of Marcus Aurelius as Caesar shown here, to make a silver denarius, the penny of the Bible. Gladiators accumulated sestertii in hopes of buying their freedom.

How much would they have to pay you to clothe you in a loincloth, arm you with a dagger and send you out in the arena to fight a well-trained man, possibly to the death?

In ancient Rome, the owners of gladiator schools were paid 1,000 to 15,000 sestertii for each fighting man, depending on the gladiator’s skill, the size of the event and whether he fought as part of a group or one on one.

Winning gladiators got a piece of the action. Losers often left feet first.

While most of the people sent to their deaths in the empire’s amphitheaters were captives, Christians or convicts, gladiators were in a class by themselves. They were skilled, well trained, well cared for, valuable fighters whose contests did not always end in death.

Many were slaves consigned by their masters to private gladiatorial schools, but some, enigmatically, were freeman.

Freeman swore an oath, the sacramentum gladiatorium, when joining a school, essentially signing away all their rights for a set period of time. “I will endure to be burned, to be bound, to be beaten and to be killed by the sword,” they swore. Slaves fought for the possibility of freedom. Freeman fought for money, lots of it. Freeman received a signing bonus, which maxed out at 12,000 sestertii under a decree of Marcus Aurelius for skilled gladiators who re-upped.

The sestertius was a bronze coin, larger and heavier than a silver dollar. It took four of them to make a silver denarius, the penny of the Bible. The dime-size denarius is what vineyard workers were paid for a day’s labor in Matthew 20. A gladiator was worth the equivalent of 250 to 3,750 days of labor in the vineyard. The money was paid to the owner of the gladiator school. Winning gladiators received a purse, often counted out coin by coin to the jubilant delight of the crowd, equal up to a quarter of their market value.

Programs often began with the killing of captives and Christians for the amusement of the crowd. Later came fights between gangs of gladiators and then the individual contests.

Beginning and less-skilled gladiators fought in the gangs. Better gladiators fought one on one. The winner either killed the loser outright or, at the will of the crowd, executed him. Strong, brave fighters were usually shown mercy and allowed to walk away, if they still could. Cowards got a spear to the back or a blade to the throat.

What were a gladiator’s chances? Estimates are all over the place. The tombstone of Flamma, who died at the age of 30 after 13 years as a gladiator, recalls that he fought 34 times, won 21 times, fought to a draw nine times and lost, but was shown mercy, four times.