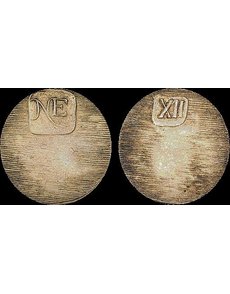 This Thomas Wyatt struck copy in silver of a New England shilling, offered in the John J. Ford Jr. Collection auction in May 2006 by Stack’s, was earlier part of the famed F.C.C. Boyd estate.

Despite striving to acquire superlative coins, sometimes collectors just plain have to settle for something that’s second best. We can’t all have the nicest coins, the rarest coins or the prettiest coins. For one thing, there aren’t enough to go around. Secondly, we can’t all afford them. As any economist would tell you, the second fact is directly related to the first.

The same economist would tell you that when you settle for something — when you want filet mignon but you end up with hamburger — you’re acquiring what is called a “substitute good,” something that stands in for another instead of complementing it.

This phenomenon is why struck copies and electrotypes find such a ready market among Colonial coin collectors. Most collectors can’t afford a New England shilling. This has been the case for as long as New England shillings have been collected, and before 1860 their price had already crossed the $20 mark.

Into this marketplace a numismatist named Thomas Wyatt offered struck copies, replicas that resembled the illustrations he found of New England shillings in Joseph Felt’s An Historical Account of the Massachusetts Currency, published in 1839. Collectors snapped up the Wyatt copies, and they quickly became collectibles themselves. Today, a nice Wyatt copy of an NE shilling will sell for well over a thousand dollars; an example in a 2006 John J. Ford Jr. auction brought $2,645.

Electrotypes, a kind of replica made through an electroplating process, more precisely duplicate the fine details of the original coins. In the 19th century, electrotypes were extremely popular with collectors who sought to include examples of unobtainable rarities in their collections. Even the U.S. Mint made electrotypes of pieces in its cabinet to sell to collectors.

Today, finely made electrotypes are avidly sought after, and they can sell for thousands of dollars.

The U.S. Mint wasn’t just in the electrotype business in the 19th century.

When rare historical medals became all the rage, the Mint actually had copy dies produced imitating the designs of rare Comitia Americana medals and other early medal types.

Today, these copy medals are rare, and they are often more beautiful than the originals they imitate. In fact, the prices of some of these copies now approach the prices of the originals. Perhaps in the near future they will become what economists call “perfect substitutes” and collectors would just as soon have the rare and beautiful copy as the rare and somewhat beat up original. We may think it’s crazy today, but what would Thomas Wyatt say about one of his knock-offs bringing two grand?