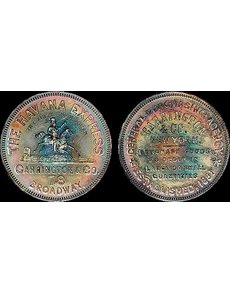 John W. Carrington was born in Danbury, Conn., in 1817 and came to New York City as a teenager to make his mark. He operated as a commission merchant in New York City as early as 1834, when Longworth’s New-York Register and City Directory listed him at that occupation at 13 Dutch St. in lower Manhattan.

Carrington also attended the University of the City of New York and became a professional civil engineer. Carrington went to Cuba to build a railroad there and then built another in Nicaragua.

When he returned to the states, he became associated with Adams & Co. Fluent in both French and Spanish, and having equipped himself with useful business experience, in 1851 he formed his own agency to fill orders for merchants of Panama and South America for goods available at New York City.

In 1854, he associated with an A.M. Hinkley in a baggage and freight express at 78 Broadway, but this arrangement did not last long. He then formed his Havana Express, also at 78 Broadway. Eventually, the company operated all over Cuba and was restyled Island of Cuba Express circa 1858. Later it began to also serve customers in Brazil and Mexico. Carrington would operate several businesses under the umbrella firm of Carrington & Co. He charged 5 percent on purchases made for his overseas customers.

The Carrington & Co. store card is a pictorial design illustrating a man on a horse galloping past a mile marker. This pre-Civil War store card was issued in several metals. It is cataloged in Russ Rulau’s Standard Catalog of United States Tokens 1700-1900 as NY 144 to NY 147A.

The firm is listed in the 1865 edition of John Disturnell’s Railway and Steamship Guide Giving the Railroad and Steamboat Arrangements also at No. 40 Broadway.

However, a notice announcing a chartered “Pleasure trip to the Mediterranean and Black Sea” commencing May 12, 1866, in the collections of Stanford University, lists Carrington & Co. at a 30 Broadway address. In March 1879, the partners were listed as John W. Carrington and Raymond Carrington, relationship unknown. The firm was absorbed by Baldwin & Co. John W. Carrington died April 21, 1895, in Brooklyn, N.Y.