The Crispus conundrum: Heir to Constantine the Great dies 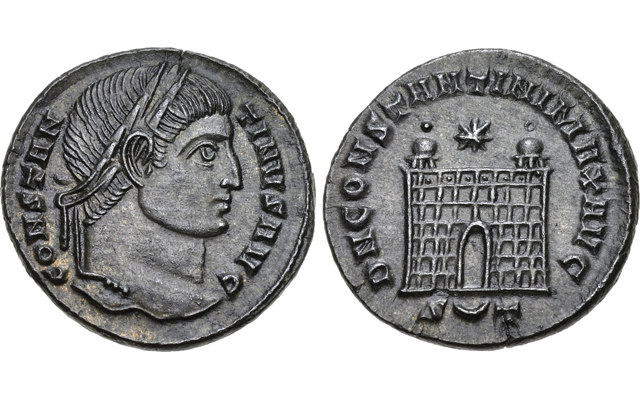 Crispus’ father, Constantine I, is portrayed on this bronze follis from the mint of Ticinum, struck in A.D. 326, the year of Crispus’ execution. The reverse shows a camp gate. 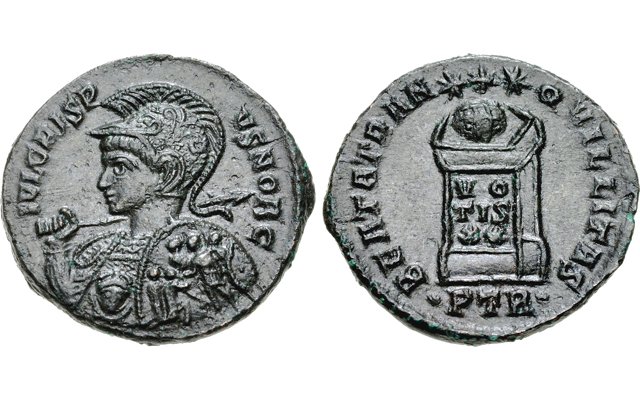 The heir-apparent of Constantine the Great, Crispus, is shown in a heroic fashion on this bronze follis struck A.D. 322 to 323 at the mint of Trier. The reverse celebrates a state of "happy tranquility" in the empire that would soon be shattered. Folles are also referred to as nummus or "AE3" pieces by collectors.

In A.D. 326 one of the most unfortunate events in Roman history occurred.

That was when Crispus, the eldest son and promising heir of the Emperor Constantine I “the Great” (A.D. 307 to 337), was executed after having been condemned in a court of law. To merit that punishment he must have been convicted of something on the order of high treason, though details of the affair were as veiled then as they are today.

Few details of Crispus’ life are recorded in the historical works that survived the censorship of the Constantinian Era. The execution of Crispus was controversial, and astute historians of the day treated the subject in a cursory manner or passed it over altogether.

Little is known about Crispus’ mother Minervina, who was virtually scrubbed from the historical record. She is variously described as Constantine’s wife or concubine. Their relationship was played down after A.D. 307, the whirlwind year in which Constantine became emperor and married Fausta, the daughter of another emperor, Maximian (A.D. 285 to 310). In dynastic terms, this was Constantine’s first and only legitimate marriage.

Crispus spent most of his formative years in Germany since his father — by then emperor — had set up his court in Trier, a city not far from the northern border of the Roman Empire. Barbarian invasions in the region were commonplace in the early fourth century A.D., and it was important that an emperor or his associates were stationed nearby.

During those years in Germany, Crispus could observe the army and the government in great detail. By the time he was a teenager, his father already had entrusted him with serious responsibilities in overseeing affairs in the Western provinces. Crispus’ role became vital in A.D. 312, when his father began his relentless push eastward to defeat rival emperors and to gain control of the remainder of the empire.

Crispus was helpful along the way, keeping the Western provinces in order during his father’s absence. In 316 Crispus was rewarded with the subordinate rank of Caesar, a title he held until his death a decade later. His greatest achievement, however, was the defeat late in 324 of the much larger fleet of his father’s last rival, the Emperor Licinius I (A.D. 308 to 324). This was critical in allowing his father to defeat Licinius later in that same year.

As remarkable as Crispus’ achievements were in government and warfare, he clearly made some miscalculations in the realm of family politics, and was unable to defend himself against the hostility of others. Since the truth of the events surrounding his downfall are lost, we can only speculate as to what drove Constantine to order the execution of his eldest son.

In dynastic terms, Crispus’ illegitimacy ran two generations deep: not only was he the son of his father’s “concubine” Minervina, but he was the grandson of Helena, a future saint who reportedly had been a barmaid when she became involved with his grandfather Constantius I.

This created a problem for Crispus, who under the best of circumstances would find his illegitimacy to be a problem. But to complicate matters further, Crispus’ stepmother, Fausta, had given birth to three sons by Constantine: Constantine II, Constans and Constantius II. All were still young children by the time their half-brother Crispus had become an accomplished general.

Despite their youth, Crispus’ half-brothers had the advantage of being the sons of Fausta, the emperor’s current wife. Their legitimacy under Roman law was beyond dispute, and unless Constantine died or forfeited his power before the three boys reached maturity there would be no meaningful opportunity for Crispus to advance.

Historians have long speculated about Constantine’s motives in the execution. Had Crispus led a failed coup against his father? Did he press his father to retire, only to be met with a fatal rejection? Did Crispus make an amorous advance toward his stepmother (as had been scandalously suggested), or could Fausta have made this claim falsely to frame Crispus and thus clear the path of succession for her three sons?

The only thing certain is the fact that Crispus was executed quickly and quietly. His death must have come as a shock to many in the Roman world, but few — if any — would have challenged Constantine. Until the time of his downfall, Crispus appears to have been both trusted and admired. Many millions of coins were struck bearing his portrait, name and title. What greater demonstration could there have been that until the last moment Constantine harbored no objection to the promotion of his eldest son?

It is noteworthy that toward the end of Crispus’ life his coin portraits became increasingly “heroic” in character, which would not have occurred if Constantine had wished to suppress him. Whatever occurred in 326, it appears to have been both sudden and unexpected.

Equally dramatic events followed, which leads one to suspect that Crispus had, indeed, been framed by his stepmother. Before the year had ended, Constantine ordered another execution — that of Fausta, who was smothered to death in a steam bath.

The reason for Fausta’s execution was equally obscured in the historical record, though its timing leads one to believe it was linked to the murder of Crispus. Making it all the more likely that Fausta was executed for framing her stepson is the fact that Constantine later erected for Crispus a golden statue that honored “the son whom I unjustly condemned,” and that Constantine’s mother, Helena, soon left on a pilgrimage to the Holy Land, ostensibly to seek spiritual relief on behalf of the royal family.