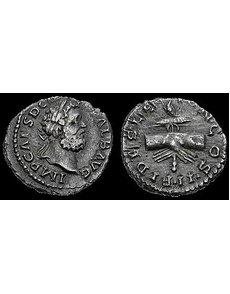 Once he parted ways with Septimus Severus, Clodius Albinus struck his own coins in Gaul. A silver denarius of Albinus shows two hands clasped around a legionary eagle. 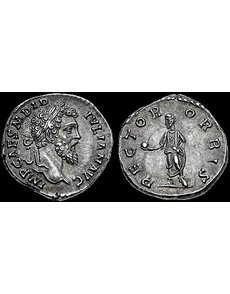 Didius Julianus, who bought the throne of the Roman Empire at auction, is portrayed on a silver denarius. Its reverse describes him as RECTOR ORBIS — “master of the world.” 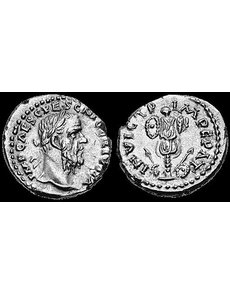 Denarii of Pescennius Niger, the rival of Septimus Severus in the East, are rare today. This piece of the Antioch Mint shows on its reverse a military trophy. 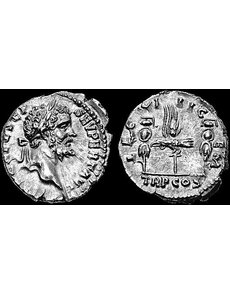 Septimus Severus, shown on this denarius of A.D. 193 minted in Rome, celebrates the 13th Legion; the reverse shows a legionary eagle flanked by two battle standards.

The “Golden Age” of the Roman Empire had been disintegrating for 30 years by the time the Emperor Commodus was murdered in a palace coup on New Year’s Eve, A.D. 192.

As much as the overthrow of this inept emperor was a cause for celebration, the four years that followed were hardly an improvement.

The initial response was promising. Power was assumed by Pertinax, a consul and the prefect of the city of Rome. He introduced reforms that seemingly would benefit the empire, but that threatened the interests of officials who had thrived on the graft and corruption under Commodus.

Pertinax was murdered after a rule of only 86 days, but not before he struck a good number of coins in gold, silver and base metal. These coins are scarce or rare today. Exceptionally rare coins were also struck in Alexandria, Egypt, for his wife and son.

What followed his murder may be the lowest moment in Roman history. The right to rule the empire was sold at a public auction by the praetorian guards — the very men responsible for the emperor’s protection. The highest bidder was Didius Julianus, a wealthy nobleman who had more money than scruples.

For all his wealth and ambition, Didius Julianus was not up to the task. Not only did he fail to produce the funds he had promised the praetorian guards at the auction, but he was unable to oppose rebellions that in the meantime had been raised by generals in the provinces.

Three frontier generals responded to pleas sent throughout the empire by citizens of Rome. One general, Clodius Albinus, was based in Britain; another, Pescennius Niger, was at the other end of the Roman world, in Syria. A third, Septimius Severus, was in a far better position, for he was stationed at Carnuntum, a legionary stronghold in the northeastern part of modern Austria.

Only a few days’ march from the capital, Septimius Severus was the greatest threat to Rome’s new emperor. He had command of more than three legions in Pannonia and soon gained the support of all the remaining legions stationed along the Rhine and Danube, totaling more than 16 legions. The praetorian guards would be no match for the seasoned Pannonian legions commanded by Septimius Severus.

Didius Julianus was murdered 65 or 66 days after he’d purchased the throne. His coinage is very much like that of Pertinax, consisting of standard imperial issues in all three metals, though they are even more difficult for collectors to locate. The same may be said for the coins he struck for his wife, Manlia Scantilla, and his daughter, Didia Clara.

Upon arriving in Rome, Septimius Severus took command. The Senate reluctantly hailed him emperor, and the praetorian guards handed over the men responsible for the murder of Pertinax. Soon enough, Rome’s new emperor replaced the entire praetorian guard with a force of men loyal to him and numbering twice as many as in the old guard.

Now secure in Rome, Severus began to issue coins in his own name and that of his wife, the Syrian noblewoman Julia Domna. Severus even struck some very rare coins in memory of the slain Pertinax, whom he had forced the Senate to deify.

However, Severus still needed to tie up loose ends. Clodius Albinus and Pescennius Niger had both been hailed emperor by their legions, and they seemed eager to stick to their claims. Severus put Albinus at bay by granting him the subordinate title of Caesar, which allowed Severus the freedom to deal with Niger.

Under this arrangement, Severus issued many coins at the Rome Mint on behalf of Albinus as Caesar. Meanwhile, far more substantial emissions continued for Severus and Domna as they led an army east. In a series of engagements in Thrace and Asia Minor, they defeated Pescennius Niger.

While there, they struck imperial coins at mints in the East, including Laodicea and Emesa in Syria and Alexandria in Egypt. The distinctive style of these coins — principally silver denarii — distinguishes them from the Rome Mint issues. Most of Niger’s imperial coins were produced at Antioch, though it seems that a second mint, perhaps Caesarea in Cappadocia, issued a smaller quantity of his silver denarii.

The civil war with Niger ended by the fall of 194, but the Severan family remained in the East for a year or more afterward to lead punitive expeditions against those who had supported Niger.

Upon returning to Rome late in 195, Severus made his move against Albinus, who in the meantime had loyally remained in Britain as its governor. Severus declared Albinus a public enemy and instead raised his eldest son, Caracalla, to the rank of Caesar. This dashed all hopes in the Senate for a restraint against Severus, who through this act had established a family dynasty.

Albinus reacted quickly, preparing for the inevitable war by crossing the channel and basing himself in Gaul. Meanwhile, Severus stopped issuing coins for Albinus and, presumably early in 196, began to strike coins for Caracalla. Also, Albinus began to strike his own coins, which bore his name and the title of Augustus.

With Albinus producing such coins, there was no doubt that he and Severus would have to launch the empire into another civil war to resolve their differences. The mint of Albinus’ coins as Augustus has been identified as Lugdunum (modern-day Lyons, France) based upon historical circumstances and the fact that one issue of denarii has a reverse type celebrating that city.

Lugdunum was a principal mint for Roman gold and silver coins under the Julio-Claudians in the first century A.D., but had been inactive since the late 70s A.D. The lack of recent experience is clear, for the Lugdunese coins are quite different from the contemporary Rome Mint issues in both style and production quality.

The civil war ended when Severus defeated Albinus in a pitched battle outside Lugdunum in February 197, by which he consolidated his grip on the empire. In the following year, 198, Severus also began to strike coins in the name of his youngest son, Geta, whom he had raised to the rank of Caesar to round out his family dynasty. ¦