The aftershock of theft: A lingering problem of stolen 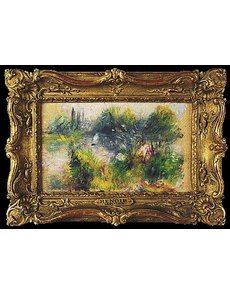 This painting was withdrawn from an auction amid concerns it was once stolen.

Image courtesy of The Potomack Company.

Sometimes the key issue with a discovery is not always the most obvious one.

Take for example the recent “flea market discovery” of a small 1879 painting by the French Impressionist Pierre Auguste Renoir.

The landscape, identified as a Renoir on the name plate on the ornate gilt frame, was allegedly purchased for $7 in a box of junk at a West Virginia flea market.

Initially most reports focused on the value and authenticity of the picture. The Virginia auction house that was set to offer it in a Sept. 29 auction at a low estimate of $75,000 confirmed that it was authentic after vetting it with outside experts.

Turns out authenticity wasn’t the issue: The painting was likely stolen from the Baltimore Museum of Art in 1951.

While the picture was not included in several databases that track stolen and missing art, the museum received an insurance payout of $2,500 for the picture sometime after the theft. The painting’s sale has been halted pending the conclusion of an FBI investigation to determine the rightful ownership of the painting.

As thefts continue in the numismatic world — this week’s issue tells the story of one at a museum and another at a coin shop — an issue that lingers long after a theft is what becomes of the stolen property after the theft is forgotten and the items trickle into the marketplace.