Taking aim at the Swiss 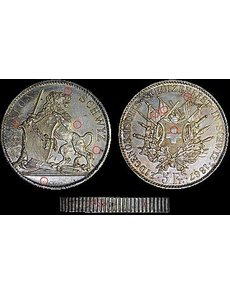 Red circles designate some of the areas where diagnostic depressions can be found. Depressions are also evident on the edge reeding.

The Swiss issued a series of silver 5-franc medallic coins during the 1800s commemorating the shooting festivals that would be held every few years. Unfortunately, they are also becoming popular with Asian counterfeiters.

The fake illustrated here attempts to replicate the issue released to mark the 1867 Shooting Festival that was held in the canton of Schwyz. The obverse features a lion holding a sword and a shield, and the reverse features an array of flags, swords and axes in a wreath, with the Swiss cross in the center.

The fake is reasonably deceptive, but it does have a number of diagnostics that make its detection easier. It appears that the fake dies were produced using the transfer process, where a genuine coin has its details transferred over to the counterfeit dies. Every contact mark or defect on the genuine coin is also transferred to the fake dies, leaving marks that we call “depressions.”

On the obverse, diagnostic depressions can be found in the following areas:

? Just above the lion’s nose.

? In the field just to the right of the lion’s elbow.

? In the field between the lion’s tail and the rim at 4 o’clock.

On the reverse, diagnostic depressions can be found in the following areas:

? In the upper arm of the cross in the center of the coin.

? On the lower left flag, running diagonally downwards from the right edge.

? On the upper left flag, two small depressions in the middle of the flag.

? On the top right flag, extending from the center of the flagpole towards the tip of the rifle.

It also appears that the edge collar was produced using the transfer process, as a number of depressions appear on the edge reeding that must have been minor damage on the genuine model coin.

If you have an example of the Swiss 1867 5-franc coin that matches this pattern of depressions, you can be certain that the coin you are inspecting is counterfeit. Contact marks occur on large silver coins like these in a totally random fashion, so a series of precisely matching marks on separate coins is always a cause for concern.

Other things to look for on this type of counterfeit are slightly weak details, a lack of crisp die polish lines, an odd satiny luster and a somewhat “ratty” appearance in the fields. Having a coin certified by one of the major grading services before you complete the purchase is also a good idea.