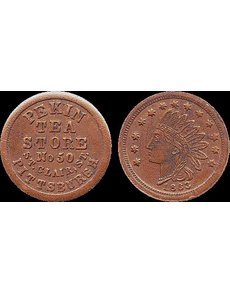 Store card is from the Pittsburgh agency of the 19th century Pekin Tea Co., which had branches throughout the United States.

“Pekin” was a common 19th century name for the large Chinese city known widely as Peking, now Beijing. The company imported green and black teas on its own account directly from China and offered fancy teas to the public in small quantities at low prices even wholesalers could not get otherwise.

In 1845, the company published Guide to Tea Drinkers to acquaint new customers with the different teas available and their physiological and psychological benefits. Another of its early catalogs heralded “A New Era for Tea Drinkers.” The company paraded “The China Man” around to its various store openings to draw in curious spectators and potential customers.

The company advertised extensively, promoting “pure teas and honest prices.” Its top sellers were Hyson, Gunpowder, Imperial and Oolong done up in all the fancy-colored packages the “Celestial Empire” could invent. Pekin offered newspaper editors double their ad rate prices in tea from its catalog in exchange for long-running notices in their pages.

Pekin aggressively undercut the market, working on a modest profit margin. The company’s approach worked. Its store in New York City occupied 75 and 77 Fulton. Its store in Philadelphia at 600 Callowhill occupied four floors at the corner of Sixth Street.

Alex Jaynes operated the Pekin Tea Store in Pittsburgh, Pa., in 1847 according to the city’s business directory. It was located on Fourth, between Wood and Market streets. In 1860, the Pittsburgh agency was in the hands of Thomas Smith at 38 Fifth Ave.

Three years later, its location was No. 50 St. Clair St. according to a series of copper Indian Head Civil War store cards struck in Cincinnati for this merchant in 1863, during the small change shortage of the Civil War era. Some rare collector issues produced in copper-nickel dated 1864 followed.

An antebellum store card representing the Pekin Tea Co. agency in Chicago, operated by C.N. Holden, is also known. Pekin Tea was active in Pittsburgh through at least 1881 when it was located at 4318 Butler.

Fred L. Reed III has been a collector and writer for many years. Reach him at www.fredwritesright.com.