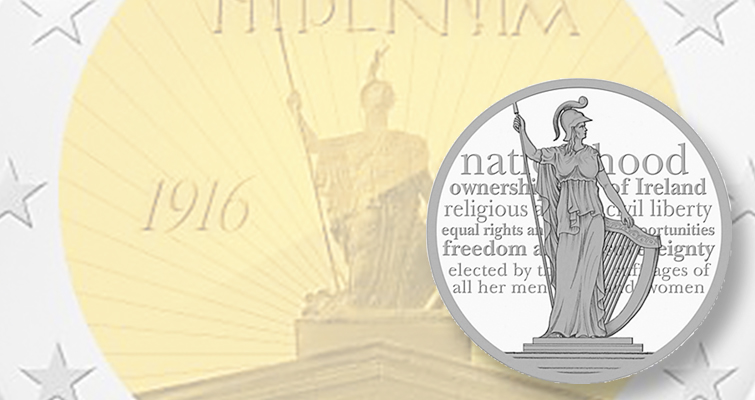 Image courtesy of the Central Bank

The first, by Emmet Mullins, will be used on the reverse of ringed bimetallic €2 coins to be issued into general circulation in January 2016, as part of the Ireland 2016 Centenary Programme. The second, by  Michael Guilfoyle, will be used for gold and silver Proof collector coins, also denominated €2, which will be available in March 2016.

This is the first time Ireland will issue its own commemorative €2 circulation coin. The €2 coins will each feature significant references to Irish history. The coins mark the centenary of the Easter Rising.

"The winning designs feature depictions of the statue of Hibernia, the historic personification of Ireland, on top of the GPO in Dublin, the headquarters of the provisional government during the Rising," a Central Bank press release reads.

See the coins and read more about the Central Bank's plans.

"When the U.S. Mint informed its authorized purchasers Sept. 8 that the weekly allocation of American Eagle silver bullion coins was 1 million pieces, orders were immediately placed for 909,500 of the total allotment."

That left just 90,500 coins for authorized purchasers to buy, and those were all purchased on Sept. 10.

"Recycling silver by way of melting coins that contain the precious metal is estimated to be nearly five times higher in Europe than North America during 2015, according to a Sept. 9 report commissioned by The Silver Institute."