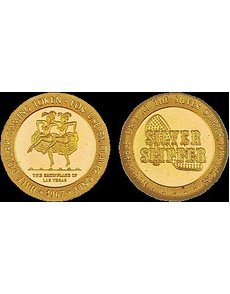 This 50-cent token featuring showgirls is from 1967 and is one of a 32-part casino series made by the Franklin Mint. 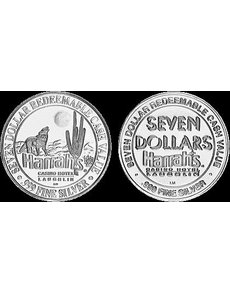 Even though $7 silver tokens like this one from Harrah’s have 0.65 ounce of .999 silver, they are not as popular with collectors as the ringed-bimetallic silver-brass $10 tokens with a core of 0.60 ounce of pure silver. 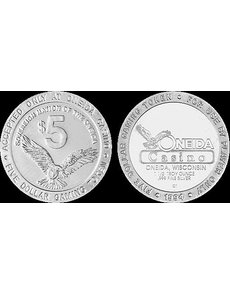 This unusual 44-millimeter, 1.5-ounce .999 silver $5 token was issued by the Sovereign Nation of the Oneida in 1994 for use in its casino in Wisconsin. 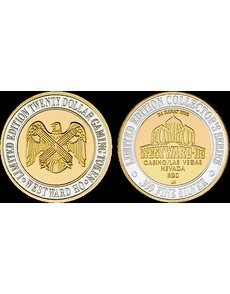 This .999 fine silver $20 Westward Ho token weighs 40 grams or 1.28 troy ounces, and has selective 24-karat gold plating, but is not the largest made. Some pieces with a $200 denomination contain 12 ounces of silver. 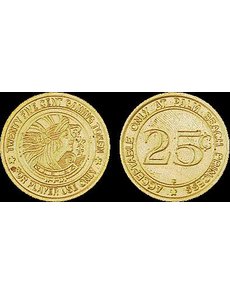 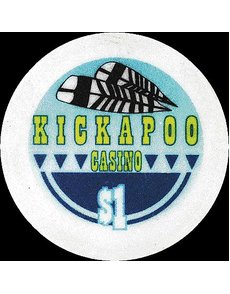 Clay composite chips are among the oldest types of casino gambling tokens and remain in use in many casinos to this day, including at the Kickapoo Casino in Oklahoma. It opened in 2002. 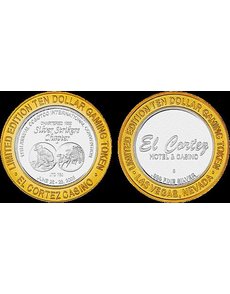 This ringed-bimetallic silver-brass $10 token is part of a limited edition from the El Cortez Casino made in honor of the Silver Strikers Chapter of the Casino Chip & Gaming Token Collectors Club.

Gaming chips or “cheques” have been part of gambling for centuries, but collecting them and related items like tokens has enjoyed a significant following only since the 1970s.

The catapulting event was a 1965 change in Nevada law that allowed casinos to make their own gaming tokens. Silver prices were so high the casinos could not keep enough silver dollars on hand. Land-based, floating and cruise line casinos around the world soon followed suit in creating their own tokens in reaction to the silver coin shortage, and an entire field of exonumia was born anew.

Gambling tokens, cheques, chips and jetons have been available to collect for centuries, but casino numismatics didn’t take off until Nevada casinos began making their own tokens and strikes in the late 1960s. These new pieces were coin-like and often coin-sized in their design and were made out of typical coin metals like silver and copper-nickel. Because they resembled coins so much, and because many designs were flirtatious if not naughty, many casino customers took them home. Overnight, a once sleepy field of exonumia was reborn and began to grow in size, created to serve gambler and tourist alike.

These diverse items are made from materials ranging from gilded silver to clay. Early chips made of mother-of-pearl and ivory gave way in the 1880s to shellac and clay composites with anti-counterfeiting embossed surfaces. Manufacturing picked up after 1931 when Nevada became the first state to legalize gambling.

Clay poker chips remain in use in many casinos worldwide, including the Kickapoo Casino in McLoud, Okla. An undated 38-millimeter example of one of its $1 clay chips shows the same eagle feather design on both sides. It was acquired the same year the casino opened, in 2002.

Gambling token denominations are numerous, including odd denominations as well as those found in legal tender. One fractional example is a 25-cent, quarter-sized brass token from the Palm Beach Casino Cruise Line, issued circa 1998. Cruise line casinos offer games of chance similar to those offered by casinos found on land and rivers. However, the Cruise Line casinos use different denominations, such as $12 strikes instead of $10 strikes found at land-based casinos.

Fifty-cent gaming tokens are typically the size of a United States half dollar.

A 50-cent token from the Silver Slipper Club in Las Vegas was brought home by my father after he visited the casino in 1967. He liked the “pretty showgirl” design. Casinos took notice of the fact that many visitors were like my dad. Since it costs much less than 50 cents to make a half dollar token, the casinos make money on every souvenir hunter.

By 1978, enough collector interest was shown industry-wide in the $1 and larger denomination silver tokens to encourage creation of an international series designed to appeal to hobbyists, issued by the Franklin Mint (also one of the principal minters of the tokens for use by the casinos). One of the 25 tokens from this private mint’s popular “Gaming Coins of the World’s Great Casinos” series is the Proof silver 100-peso token made for the Manila Bay Casino in the Philippines. Every denomination in the series was the equivalent of $25 U.S. at the time of manufacture.

American Indian casinos have contributed to the wealth of collectibles, too, ever since the passage of the Indian Gaming Regulatory Act in 1988. The Oneida Casino in Wisconsin opened in 1990 and issued a 1.5-ounce .999 fine silver $5 gaming token 44 millimeters in diameter in 1994. Among silver casino tokens, this is one of the more unusual sizes and denominations.

The $7 face value silver gaming tokens are much more common. Harrah’s Casino was the first to issue a $1 token in 1965 and continues to issue strikes to this day such as the illustrated 0.65-ounce .999 fine silver $7 token with coyote design (36 millimeters).

The ringed-bimetallic $10 token with a 0.60-ounce silver core and a brass ring is definitely the most popular format with casino token collectors. They were developed in 1992 by casinos in Reno and Tahoe as premiums to be won in slot machines.

Casinos have cashed in on collector interest with limited editions, commemorative themes and different colored capsules or holders. Some casinos have flirted with the hobby by issuing designs that feature collecting clubs. For instance, in 2003, the El Cortez Casino in Las Vegas issued a $10 token for the 11th Annual Convention of the Silver Strikers Chapter of the Casino Chip & Gaming Token Collectors Club.

Some large silver pieces look like ringed-bimetallic tokens because they have selective gold plating.

One such example is an undated $20 chip from the Westward Ho Casino along the Las Vegas Strip. It is 47 millimeters in diameter, contains 1.28 troy ounces of pure silver with gilded areas and was made in 1995.

Rising silver prices continue to have a huge impact on this hobby. Since 2009, for example, some casinos have issued silver-plated clad tokens to appeal to budget-conscious customers. They are easy to spot because they lack the legend “.999 silver.”

Popular with bullion collectors as well as exonumia enthusiasts, massive $200 tokens contain 12 ounces or one troy pound of pure silver, and are almost always selectively gilded. Since 2011, these have morphed into $300 issues but now have only half as much silver, or 6 ounces. ¦