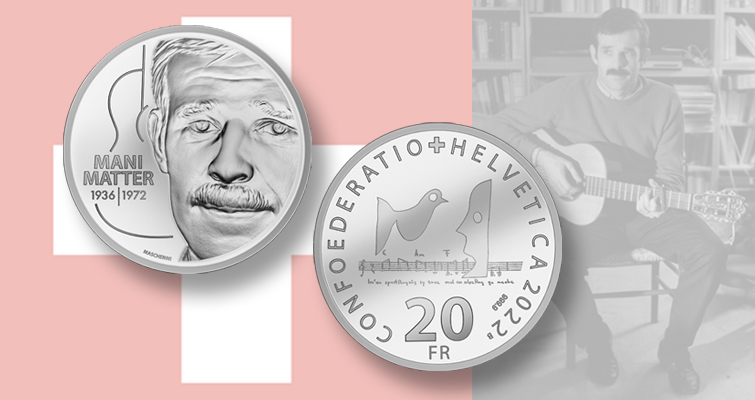 Singer-songwriter Mani Matter is the subject of a 2022 commemorative coin from Switzerland, the first .9999 fine silver 20-franc coin from that country.

Switzerland has increased the fineness of silver in its commemorative coins, hoping it strikes a chord with collectors.

The first coin to be struck from .9999 fine silver (as opposed to the .835 fine silver used previously) is a 2022 20-franc coin to celebrate singer-songwriter and lawyer Hans Peter “Mani” Matter.

The new coin was released Nov. 24, the 50th anniversary of his death.

The increase in fineness coincides with a rebranding of Swissmint’s commemorative coins, which are now sold under the “Swiss special coins” brand.

“To increase sales, the word ‘Swiss’ will be used to refer clearly to the origin,” according to the announcement of the change. “The aim is for the coins minted under this brand to be recognisable for everyone so as to differentiate our products from those of other suppliers of coin-like items.”

Inspired by Georges Brassens, he began writing, composing and interpreting Bernese dialect chansons at the age of 13.

The obverse of the 2022 coin shows, at the right, part of Matter’s face with his distinctive moustache. He looks directly at the viewer.

At left is his full name on two lines, followed by his year of birth and death, separated by a vertical line. The outline of half of a guitar forms a border around the writing.

A bird and a mask, both drawings by Mani Matter, are depicted in the middle of the reverse. A line of the sheet music for the Bernese dialect song “Dr Alpeflug” flows from the mask’s open mouth.

The corresponding excerpt from the lyrics appears below it.

The coin was designed by Swissmint engraver Remo Mascherini.

The coin is available online at www.swissmintshop.ch. 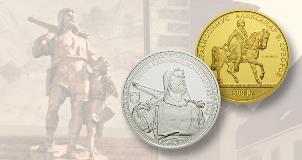 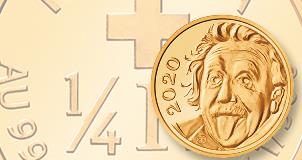 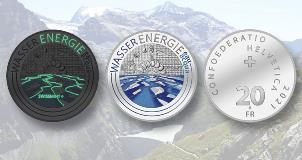