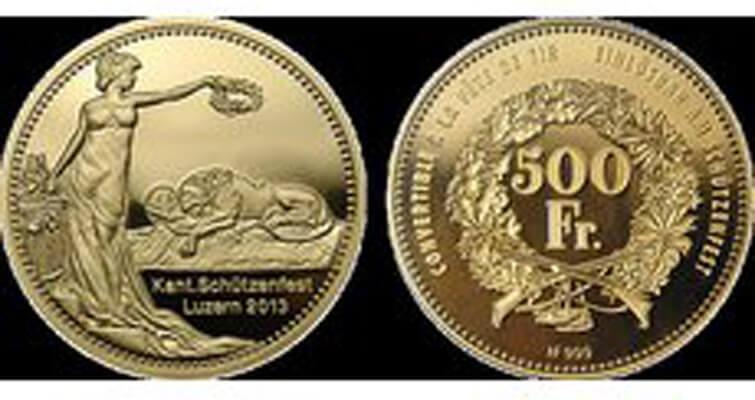 Switzerland’s 2013 regional shooting festival is scheduled for Lucerne in September, and new silver and gold Shooting talers, like the gold example shown, celebrate the festivities.

Collectors should note that fewer examples are available this year compared to recent years, as the mintages has been reduced.

The Proof .900 fine silver 50-franc and .999 fine gold 500-franc “Shooting talers” (as the medals are commonly called) mark the September 2013 event, which is being staged in the city of Lucerne (Luzern in German) in the canton of the same name.

Swiss marksmanship is legendary, recalling the story of hero William Tell who shot an apple off his son’s head. The Swiss tradition of superior marksmanship was established during the Old Swiss Confederacy, in the 15th century, when festival participants showed off their aim using the crossbow.

The modern event, while fun, has a practical side, in that it keeps the citizen soldiery drilled and sharp, according to the American distributor for the medals, Talisman Coins.

Today, the Swiss Shooting Association boasts 85,000 active, dues-paying members, according to Talisman Coins, a distributor of the pieces in the United States. Every five years a federal shooting festival draws more than 50,000 marksmen for a month to demonstrate their shooting skills. Smaller, annual, festivals, like the 2013 event, are also held.

The 2013 silver and gold medals share common obverse and reverse designs, save for the denomination indicated on the reverse.

The obverse depicts an allegorical figure that may be interpreted as the Canton of Lucerne or, alternatively, as Helvetia (the female personification of Switzerland), bestowing a wreath. Her garb is consistent with many representations of Helvetia, including that on some of Switzerland’s circulating coinage.

Her right hand rests on a fluted, classical column or plinth, with a representation of the 19th century Lion Monument in Lucerne positioned to the right.

On the reverse, a wreath of oak leaves and laurel surrounds the denomination. Beneath the wreath, a marksman’s powder horn and bandolier hang from a pair of crossed rifles or muskets. The legend indicates (in both Italian and German, two of the four official languages of Switzerland) that the medal is redeemable during the shooting festival.

Talisman offers the silver medal for $99.95 and the gold medal for $1,399.95. Shipping and handling are an additional charge.