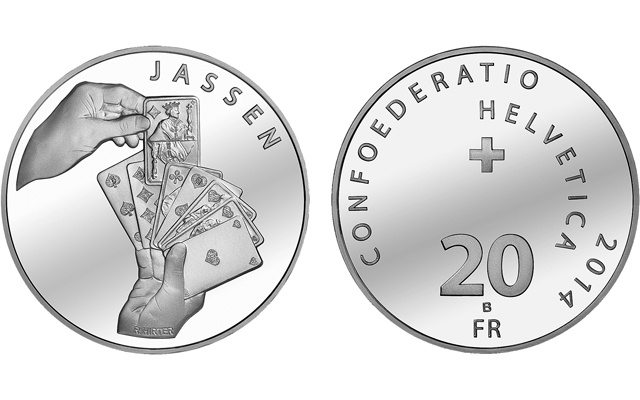 Switzerland’s newest silver collector coin celebrates the native card game known as jass. The 20-franc coin has a mintage limit of 50,000 in Uncirculated (shown) and 7,000 in Proof.

A new coin from Switzerland ignores that old admonition to “never show your cards” by highlighting the nationally popular card game known as jass.

Swissmint, the federal agency that strikes coins for Switzerland, on May 22 released the silver 20-franc coin, the second in a series honoring the nation’s sports.

The coin shows a player adding or replacing one of eight cards held by a right hand. The name of the game appears above the scene, which was designed by Roland Hirter of Bern.

Jass is a traditional card game that is regaining popularity as people return to traditional values, according to Swissmint. “No other leisure pursuit brings generations together to the same extent as the popular Swiss card game. A game of Jass can be played almost everywhere, be it in a pub, a mountain hut, on a train or in many other places.”

Some 63 percent of German-speaking Swiss adults can play jass, with 41 percent of those regularly playing the game, according to a 2012 poll cited by Swissmint.

There are several types of jass, including the classic (and most popular) form known as “Schieber.” The more advanced discipline of jass is called “Differenzler.”

Jass reflects the linguistic and cultural diversity of Switzerland. The game is played with French cards (hearts, spades, diamonds and clubs) in western parts of the country, as well as in the cantons of Ticino and Grisons, and with German cards (featuring bells, shields, roses, acorns) in the east.

The .835 fine silver coin weighs 20 grams and measures 33 millimeters in diameter. It is available in both Uncirculated and Proof versions; the mintage limit for the Uncirculated coin is 50,000 coins, with 7,000 coins offered in Proof.

The Uncirculated version retails for 25 Swiss francs, and the Proof example is priced at 55 Swiss francs. To order, visit the Swissmint’s website.

Distributor Coin & Currency Institute will offer the coins, but pricing had not been established at press time.