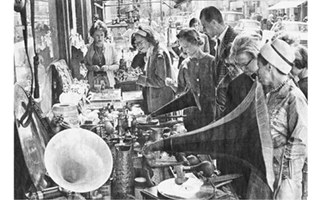 On March 29, the Financial Times ran a retrospective article about Portobello Road in London. The theme was reflecting whether the old-time tradition of the road as a center for antiques could continue, given increasing property values and the replacing of old facilities by new, expensive buildings. “The street market in Portobello Road in 1962” was the caption on the illustration, reproduced above. Quoted was Marion Gittleson, who had sold antiques there “for more than 35 years.”

This stirred my memories of the district in London, where I often went in the early 1960s. At that time the market, comprising several blocks of stalls plus several permanent stores, was active only on Sunday mornings. One of the stores open all week was that of Graham Webb, whose cluttered premises were chock full of interesting antique music boxes, a special interest of mine.

By 1962, the date of this photograph, I was a “regular” in London, having visited there many times in the search of rare coins. The “big three” coin dealers in the city were B.A. Seaby Ltd., Spink & Son, and Baldwin’s. New on the scene was Michael Stewart Millward, a dealer in the “American style,” constantly trading and with five or six telephones on his desk in the street-level premises of Stewart Ward Ltd.

Viewed as Americans with more money than good sense, Jim and I were “targets” for collectors and dealers with coins for sale. On one trip we bought six leather-cased full Proof sets of 1826 from several individuals. Imagine today, when a single coin from such a set merits a splash in an auction listing!

Returning to Portobello Road, while most stalls also had bric-a-brac, old toys and various second-hand goods, a lot of coins, tokens and medals were always on display. The 1797 Soho Mint Cartwheel pennies and twopence, always in worn grades, were very common and cost a pound or two apiece, a pound being equivalent to about $3.25 in U.S. funds. Admiral Vernon medals were also aplenty for a pound or so each. There were enough coin scouts in London that there were few bargains in (one always said “in,” not “on”) Portobello Road. However, I always found a few things to buy.

Among the old-line British dealers, my closest friend was Doug Liddell, who managed Spink’s.

The firm was located several floors up at 5 King St., St. James (premises that had been damaged years earlier in the 1940 Battle of Britain). Access was via a rickety old elevator cage. In a typical London trip I would spend many thousands of pounds with him.