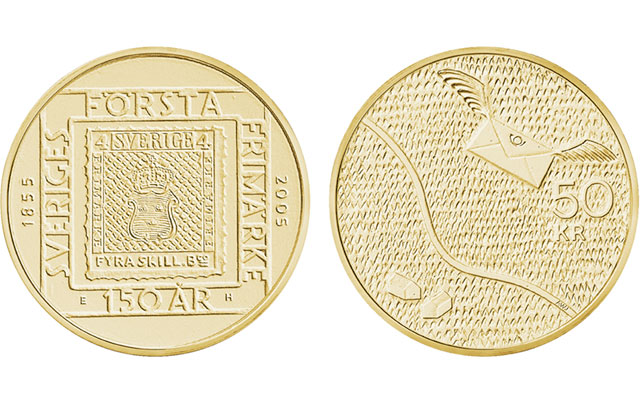 Sweden’s first postage stamps are honored on a 2005 coin issued by the nation’s central bank. However, the 4-skilling-banco stamp depicted on the coin is not Sweden’s most famous early stamp.

Images courtesy of the Sveriges Riksbank.

Editor's note: The following is the final piece of (and bonus coverage related to) a multi-part Coin World series about the intersection of coins and postage stamps prepared by Jeff Starck for the May 2015 monthly edition of Coin World.

In 2005, Sweden celebrated the 150th anniversary of its first stamps by issuing a 50-kronor coin in an aluminum-bronze composition.

Sweden’s first stamps were a series of five denominations issued July 1, 1855. The denomination featured on the coin is the 4-skilling-banco, which was printed in blue.

The obverse of the coin shows the stamp with the legend SVERIGES FÖRSTA FRIMÄRKE 150 ÅR (which translates to “Sweden’s First Stamp 150 Years”) inside a frame. On the left is the year “1855” and on the right “2005.”

The reverse of the coin shows a winged letter flying over a landscape with houses and woodland, with a road traversing the landscape. On the letter is a French horn (the symbol of the Swedish Post Office).

The 4-skilling-banco stamp, however, is not Sweden’s most famous issue from that first series. That honor belongs to the 3-skilling Yellow, as the error has come to be known.

Again, a young collector located the rarity, this time in 1885 when a youngster in Stockholm named Georg Backman discovered it. He sold it for 7 kroner a few months later.

The colorful error has been among the most controversial stamps.

In the 1970s, the Swedish Postal Museum declared the unique stamp to be a forgery, but after examinations by two different commissions (one created by the museum and another by the seller), the commissions agreed that this was a genuine stamp.

The stamp error sold three times from 1984 to 1996, establishing world record prices for a postage stamp each time. The 1996 sale realized 2.88 million Swiss francs (then about $2.3 million in U.S. funds), and the stamp was reportedly sold in 2010 for an undisclosed price similar to the earlier record.

No sales record for the 2005 base metal coin (which had a mintage of 22,000 pieces and retailed for 60 kroner) were located.

In many cases, the stamps highlighted on collector coins are the rarest and most valuable in the world, making the coins a much more affordable alternative for the hobbyist looking to combine two loves.