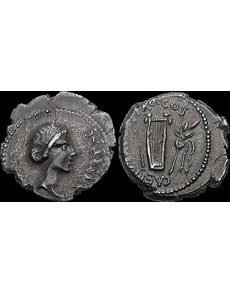 This silver denarius struck in 42 B.C. for Brutus, an assassin of Julius Caesar, suffers from a soft strike, imperfect centering and a ragged planchet, yet is highly collectible. 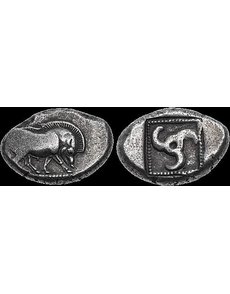 This silver stater of an uncertain ruler in Lycia, issued circa 470 to 430 B.C., is unevenly struck. The boar’s head is very sharp, yet part of its rump is essentially unstruck. 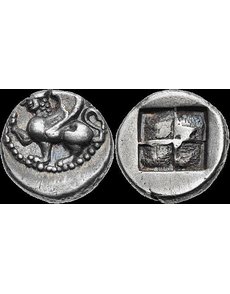 The sphinx is considerably off center on the obverse of this silver trihemiobol issued on the Greek island of Samothrace early in the fifth century B.C. 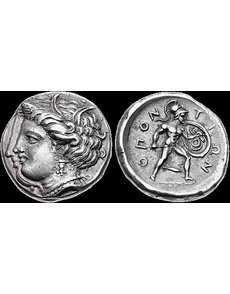 A pronounced double-strike is seen along the profile of the goddess Persephone on this silver stater issued from about 380 to 338 B.C. at Locris in central Greece.

Unlike modern coins, which are machine-struck under optimal conditions, almost every ancient coin was hand-struck.

The variables associated with hand-striking coins caused quite a range of results in the final product. Some ancient coins were nearly perfect, while others were truly horrible even as they fell off the dies.

Most ancient coins were struck with two dies, with one being immobilized in an anvil and the other being hand-held, to which a hammer blow was applied. The specifics of ancient coin production are largely unknown since little literary or archaeological evidence about ancient mints survives.

Sometimes ancient dies were set into hinges to assure uniformity in the relative positions of the obverse and reverse dies, but perhaps more often they were used free-hand. The degree of mechanization is unknown, though machinelike production methods likely were employed at the larger mints.

Regardless of the techniques employed, the quality of minting depended upon the characteristics of the dies, the planchet and the proficiency of strike.

A die is capable of imparting its sharpest image at the earliest stage of its life. The longer a die is used, the weaker its details become, as its surface erodes with each successive striking. Often this degradation is hard to detect, and other times it is extreme.

The soft details on coins struck with worn dies often are mistakenly attributed to a weak strike or circulation wear. Even if a coin is perfectly struck, but with a worn die, the original details of the design cannot be fully represented on the coin. Some ancient coins were struck with dies that were so worn that even though they are Mint State and lustrous, they have the detail of a coin grading only Fine or less.

Some of the more severe forms of die damage include chips in its surface or the impression of a “ghost” image from the opposite die, known as a die clash. The worst case scenario is when a die is cracked. These cracks range from short and shallow to deep and long, which sometimes extend across the diameter of the die.

Occasionally the surfaces of dies had a slightly pitted surface that commonly is thought to have resulted from oxidization. In these cases it is likely that dies were put aside for a while, but not protected from exposure to oxygen or other elements that adversely affected their surface.

Die engraving on ancient coins is, perhaps, the greatest variable of all. For example, if comparatively small dies intended to strike gold coins were engraved in low relief (as is the case with Byzantine gold), the odds of finding a coin with a perfect strike are reasonably high. However, the same cannot be said for bronze or silver coins struck with deeply engraved dies.

Many variables existed in the quality of the planchets (blanks) that received the impressions of the dies and thus were transformed into coins. The ideal planchet was uniformly produced in dimensions appropriate for the dies being used.

Constant debate arises over whether or not blanks of ancient coins were heated before striking, and, if so, how much. It appears that different approaches were taken at different mints, and that the metal being used was an important factor in such decisions.

Not surprisingly, imperfect planchets were more plentiful than ideal ones, and the list of defects that are encountered is long. The most common is a misshapen planchet — one that is not perfectly round or of the ideal thickness for the diameter of the dies being used.

Another common problem was the presence of impurities that were scattered throughout the planchet or that occurred in isolation. Ancient coins were also prone to having laminations, thin layers of metal that detached (or nearly detached) from their surfaces.

The quality of strike varied considerably.

In general, perfect strikes are uncommon on ancient coins, though some issues are much better struck than others. Collectors of modern coins, who are accustomed to coins being struck in collars, often comment on how ancient coins typically are a bit off center. Indeed, it is normal for ancient coins to be struck off center by 5 or 10 percent, and sometimes by more.

Especially important to the visual appeal of an ancient coin are the strength and evenness of strike. Sometimes ancients are struck softly, or are struck with dies that were incorrectly aligned. In the latter case, one portion of the coin can be struck crisply while the details on the rest of the coin are mushy or nonexistent.

Edge cracks are another common imperfection.

Most cracks were caused by the intense pressure applied to the blank when it was struck. It is also normal for the edge to have irregular surfaces due to the method of planchet production and the fact that collars were not used (except on one series of ancient Judaean coins).

Ancient coins typically had to be struck more than once to raise the detail, which often left traces of those multiple strikes.

Usually the evidence is minor — some light doubling close to the edges of devices. Other times it is noteworthy, with large parts of the original strike (or strikes) remaining bold and clear. On some occasions ancient coins were produced by using older coins as planchets, in which case traces of the “undertype” often survive the overstriking.

With all of the factors of dies, engraving, planchets and strike in play, it is remarkable that so many ancient coins were well produced.

Nonetheless, collectors have become accustomed to imperfect strikes and, within reason, they enjoy them as the distinctive badges of a hand-struck coinage. ¦