The Joys of Collecting: Tales of numismatic legend 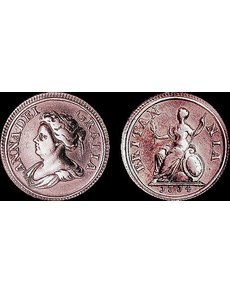 A British copper 1714 farthing (quarter of a penny) of Queen Anne, perhaps one of just three struck? Or was an 1814 newspaper report in error?

We have stories, mostly published in the 19th century, explaining the rarity of certain United States coins. Silver dollars of 1804 were minted to the extent of 19,570 pieces, per The Annual Report of the Director of the Mint, but only 15 of the date are known today. Where did they all go? The answer: They were on a ship headed to the Mediterranean when there was trouble with the Barbary Pirates, and the vessel and crew were lost.

Regarding the rarity of the 1799 Draped Bust cent, of which many thousands were thought to have been minted: Most of them were sent to Africa and lost; alternatively, these too were sent and fell victim to the Barbary Pirates along with the 1804 silver dollars.

One of my favorite fictions is from English numismatics and concerns the copper farthings (quarter of a penny) coins of Queen Anne. These have the dates of 1713 and 1714, but seem to have been made in relatively small quantities, perhaps in the thousands. Seemingly, no accurate account exists of them. Beginning many years ago the Queen Anne farthing was pinpointed as a great rarity.

The standard reference on the subject by C. Wilson Peck, English Copper, Tin and Bronze Coins in the British Museum 1558-1958, states that examples are indeed rare, but it is unlikely that any copper coins depicting Anne were made for circulation.

Whatever the circumstances, at least a few hundred 1713 and 1714 farthings exist today. They regularly appear at auction.

Peck quotes several stories, including this:

“At Dublin, 1814, an extraordinary trial took place in connection with one of these coins, an account of which appeared in The British Press newspaper, on the 14th February in that year, by which it appears that a man named George Hone received twelve months’ imprisonment for stealing a Queen Anne’s farthing. And so impressed were the parties of its great value, that it was estimated that £700 was half the price that would be realized by its sale! The council for the Crown further informed the jury that only three specimens were known, that the die broke upon striking the third farthing; and that one farthing was in the King’s Museum, the second in the British Museum, the third being missing, was presumed to be the one in question.”

Do you know why the 1804 dollar and 1799 cent are rarities? What is the real story? Something for you to check.