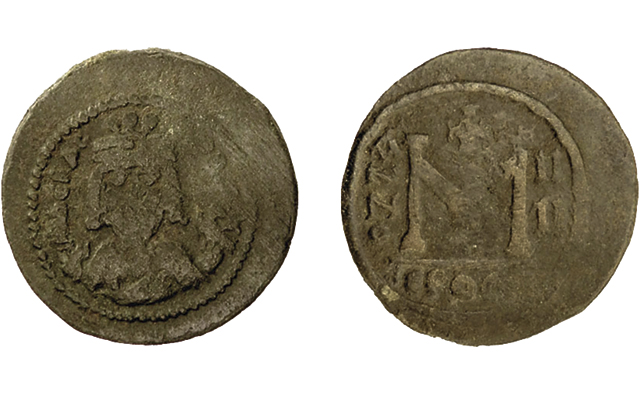 A circa 613 to 614 bronze follis from the Byzantine Empire was struck during the Persian siege of Jerusalem during the reign of Heraclius. In About Very Fine condition, it is estimated at $9,000 to $10,000. 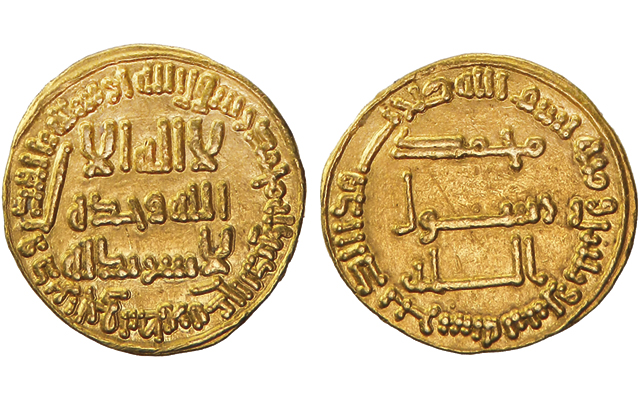 Stephen Album Rare Coins has announced that its 19th auction is scheduled to be conducted May 15 to 17, at the firm's offices in Santa Rosa, Calif.

The auction offers a total of 2,441 lots of ancient, Islamic, Chinese, Indian and world coinage, as well as numismatic literature. It includes 159 lots of Arab-Byzantine coins, one of the largest groups ever brought to auction, according to the firm.

One of the highlights is a bronze follis from the Byzantine Empire struck in Year 4 (circa 613 to 614) under Heraclius. The coin was struck during the Persian siege of Jerusalem. The siege commenced in September 613 and terminated in the Persian occupation in May 614, well into Heraclius’ fourth year of reign.

The coin was undoubtedly struck due to a severe shortage of ordinary Byzantine copper coins during the siege, according to the auction firm. Jerusalem remained in Persian control until it was reconquered by Heraclius in 629.

Because of the conditions under which the emergency money was coined, most examples of these coins are poorly struck and often badly preserved, according to the auction firm. This example, in About Very Fine, is “one of the finest known specimens” and has an estimate of $9,000 to $10,000.

Another highlight is from the Abbasid Caliphate.

Silver dirhams from the first year of coinage are sometimes available, according to the auction house, but other coins are extremely rare. No mint name is identified on the coin, but that is because no Abbasid coinage identified a mint until A.H. 198.

Issued in 1627 by Dawar Bakhsh, the silver rupee was struck at Lahore (in modern-day Pakistan).

According to the auction house, Dawar Bakhsh was the name given to Bulaki, the son of Jahangir's deceased second son, Khusrau, when he was temporarily enthroned at Lahore by Yamin ud-Daula Asaf Khan, following Jahangir’s death in 1627.

Five test marks appear on the coin (these were made in the past to verify the metal content), but as the auction house notes, even the example in the British Museum has test marks. In Very Fine condition, the coin is estimated at $5,000 to $6,000.

For more information, including travel arrangements, telephone the firm at 707-539-2120, or visit its website, www.stevealbum.com.