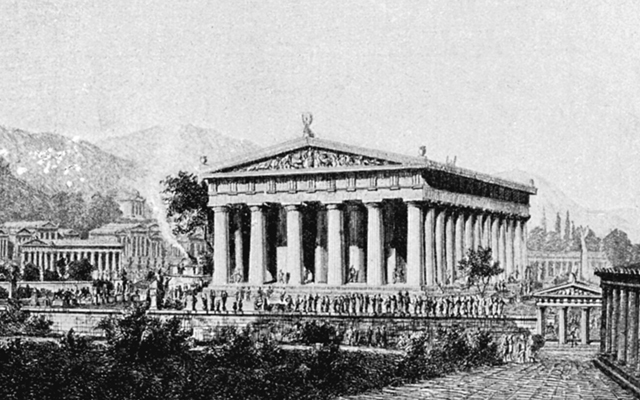 The famous statue of Zeus was found at the temple in Olympia, seen here in a historical reconstruction. 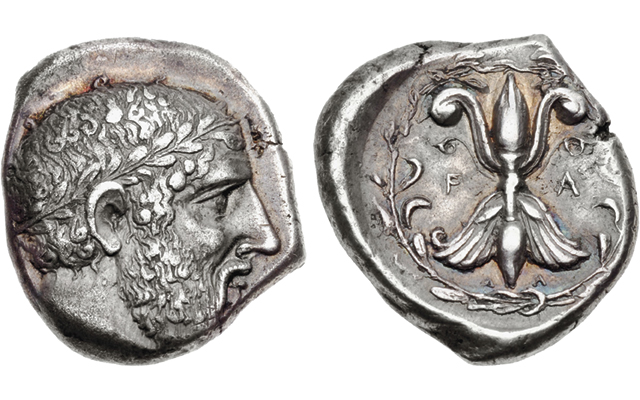 Examples of the Olympian coinage of Zeus are rare, especially in higher grades and with full strikes. This Good Very Fine example sold in a Jan. 7, 2013, auction for a hammer price of $70,000. 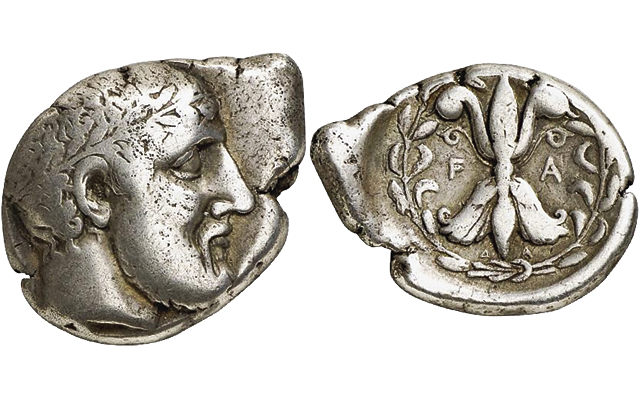 The statue of Zeus does not appear in full on ancient coins, but a close-up of the god does appear on some rare coins of Olympia celebrating the 91st Olympiad in 416 B.C. This example exhibits an irregular planchet.

The statue of Zeus at Olympia — one of the seven wonders of the ancient world — is seen up close on some rare ancient coins.

In about 450 B.C., work began on a temple in the city of Olympia (where the first Olympics were held some 300 years earlier) to honor Zeus.

About 15 years later, a 43-foot-tall statue of Zeus, the god of the sky and the ruler of the Olympian gods, was added to the temple. Created by Athenian sculptor Phidias, the ivory statue showed Zeus seated on a throne, draped in a gold robe. Zeus had a wreath around his head and held a figure of his messenger Nike in his right hand, and a scepter in his left.

In A.D. 394, emperor Theodosius I banned the Olympic Games and moved the statue to Constantinople, which turned out to be a fortuitous move when the Olympian temple was destroyed by fire. Zeus’s statue could not outpace danger, however, as it too, succumbed to fire in the mid-to late fifth century.

The statue does not appear in full, but the image of Zeus as it appears on the statue can be found on rare coins of Olympia, in Elis.

Silver staters depicting Zeus are among the great rarities of Olympian coinage, according to Classical Numismatic Group, which sold what may be the finest known example of the coin in a 2013 auction.

The circa 416 B.C. coin (for the 91st Olympiad) sports the first portrait of Zeus in the series, wearing a wreath of olive leaves as also seen on the famous gold and ivory statue. The design was replaced soon after, with one of Zeus wearing a laurel wreath instead.

Only two obverse and three reverse dies are known to have been engraved for the olive leaf wreath issue, according to CNG, meaning that the mintage for what CNG calls “this novel coinage” was rather low.

That explains the sparse appearance at auction for this coin, and the strong prices examples bring when they are sold.

The coins remain a pricey and rare snapshot of the famous statue from antiquity.