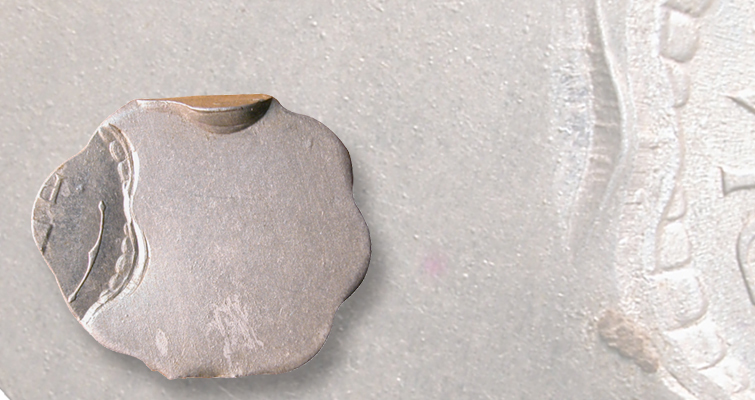 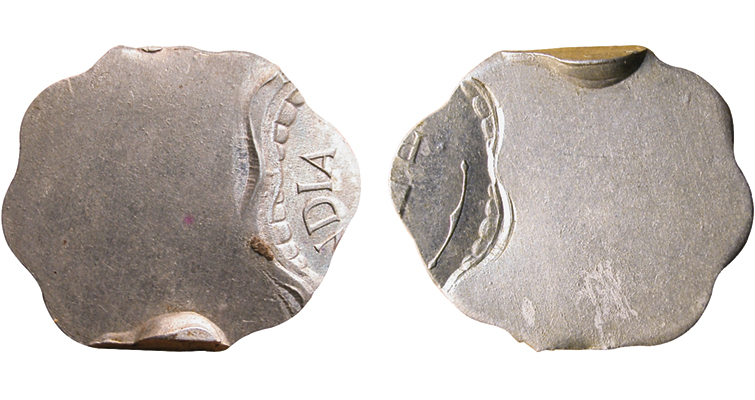 This India 10-paise coin received a conventional off-center strike by properly aligned dies and an edge strike by a massively misaligned hammer (reverse) die. The reverse pole is at top in both images.

The edge strike on the 10-paise coin carrying the obverse design shows the head and chest of the middle lion. 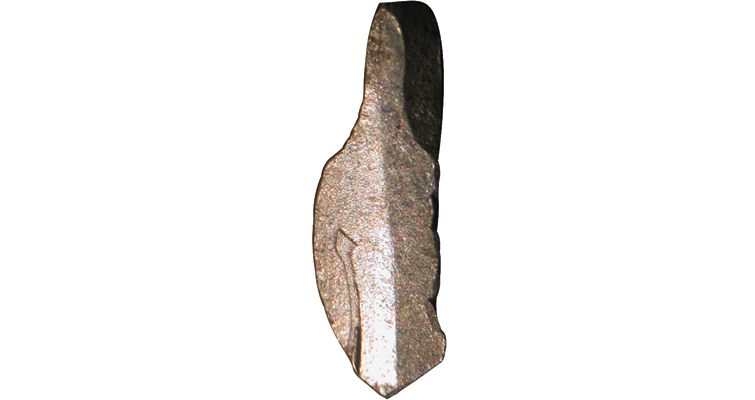 The edge strike carrying the reverse design shows the upper portion of the right bracket that lies between the denomination and the dentils on the 10-paise coin. 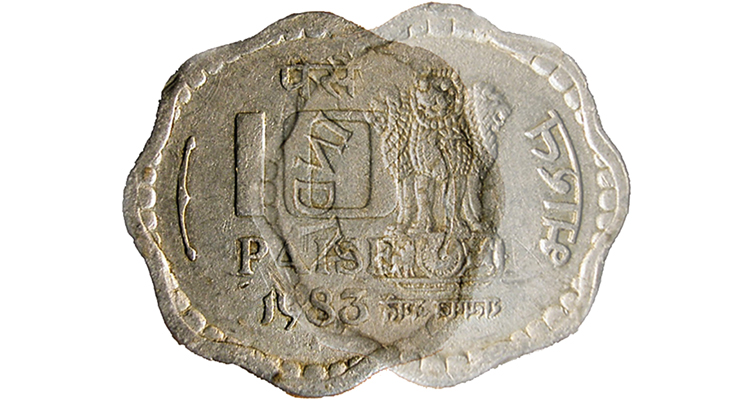 A transparent overlay shows relative positions of the misaligned hammer (reverse) die (left) and the centered anvil die (right) during the edge strike.

For reasons that are unclear, the U.S. Mint has had a near-monopoly on edge strikes and foldover strikes. Now obsolete, such errors occur when a planchet or coin is struck on-edge (Collectors’ Clearinghouse, Sept. 15, 2014). When perfectly vertical, the planchet is folded over by the dies’ impact. If the planchet’s orientation is just shy of vertical, the dies’ initial impact either kicks the planchet out of the striking or knocks it over on its side, at which point it is struck in a more conventional manner (and usually in an off-center position).

I recently encountered my first foreign edge strike in the form of an undated aluminum India 10-paise coin with a design that was minted between 1983 and 1993.

The edge strike is accompanied by the conventional off-center strike. As with most Indian coins, the reverse face of that strike was from the hammer die, a setup that is confirmed by the presence of a collar scar on the obverse face (the collar surrounds the neck of the anvil die).

The edge-struck pole bearing the reverse design shows the upper end of the decorative bracket that sits to the right of the denomination, just inside the dentils. Most unexpectedly, the pole carrying the obverse design shows the face and chest of the middle lion (the Ashoka lion motif shows three lions sitting back-to-back).

An edge strike should show design elements that lie directly opposite each other in vertical space. In the case of this example, we should be seeing some Hindi letters at the pole opposite the bracket.

It’s clear that the coin was standing on edge along the anvil die’s north-south meridian while the hammer die was horizontally misaligned about 35 percent toward the left. I had Robert (“BJ”) Neff, using a normal coin, prepare a transparent overlay to show the position of the misaligned hammer die in relation to the presumably centered anvil die.

Although edge strikes are difficult to authenticate owing to the limited amount of design present, I am convinced this one is genuine. The strike is strong and the design details convincing. The two edge-struck designs show smearing in opposite directions, with the reverse design smeared toward the west. Bidirectional smearing is seen in many genuine edge strikes.

I can’t be 100 percent certain about the sequence of strikes or even if more than one strike was involved. However, certain related errors strongly support a single interpretation.

As to which strike came first, it’s far more likely that the off-center strike preceded the edge strike. I’ve come across nearly a dozen double-struck coins in which a first strike by a centered hammer die was followed by a misaligned second strike. I’ve yet to come across a double-struck coin in which an initially misaligned hammer die returned to center for a second strike.

The mechanical paroxysms associated with a massive, instantaneous horizontal misalignment could have contributed to the upending of the off-center coin. The coin was probably kicked into a vertical position or was sent flying through the striking chamber, where it was caught on-edge.

Manipulation of a normal 10-paise coin shows that these lightweight (1.76 grams) low-density scalloped coins have great difficulty rolling and spinning on their edges. It’s therefore unlikely that the coin was sent rolling across the anvil die or was sent spinning on top of the anvil die.