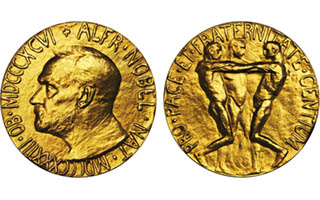 A gold Nobel Peace Prize medal awarded in 1936 to an Argentinian will be a highlight of Stack’s Bowers Galleries’ March 27 auction in Baltimore.

A gold Nobel Peace Prize medal awarded in 1936 will be a highlight of Stack’s Bowers Galleries’ March 27 auction in Baltimore.

According to the firm, the gold medal will be the first Nobel Peace Prize to be sold in the United States. Furthermore, “This is only the second opportunity on record to purchase a Nobel Peace Prize medal at auction, and the first in almost 30 years,” according to Stack’s Bowers Galleries (www.stacksbowers.com).

The firm elaborated on the scarcity of the medal in the marketplace: “We find only one instance of a Nobel Peace Prize selling at auction. In November 1985, Sotheby’s London sold the Nobel Peace Prize medal awarded in 1903 to Sir William Cremer for 11,550 Pound Sterling, roughly $16,750. ...”

The firm adds that the sale of the Nobel Peace Prize “will soon present private collectors, educational institutions and museums the opportunity to bid on the world’s most famous medal.”

The offered Nobel Peace Prize was awarded to Carlos Saavedra Lamas, an Argentinian who was recognized with the honor for his central role in negotiating the end of the Chaco War between Paraguay and Bolivia.

John Kraljevich Jr., of John Kraljevich Americana, states in an Associated Press news report that the medal’s whereabouts “fell into darkness” after the death of Lamas.

Kraljevich told an Associated Press reporter that about 20 years ago, an American became aware of the medal and purchased it from a South American pawn shop for its bullion value. The medal, made of nearly pure gold, weighs 222.4 grams, or more than 7.9 ounces; its gold content today is worth about $10,830.

Kraljevich estimates the medal could bring five to 10 times the bullion value.

According to Kraljevich’s account, the medal then traded hands several times before it was acquired by the collector whose estate consigned the medal to the Stack’s Bowers Galleries auction. The auction is being conducted in conjunction with the March 27 to 30 Whitman Coin & Collectibles Baltimore Expo.

The medal was designed by Gustav Vigeland and struck from dies by Erik Lindberg. Like other Nobel medals of its era, it was struck at the Swedish mint facility in Eskilstuna.

“The obverse depicts Nobel facing left, with an inscription including the years of his birth and death around the periphery,” according to the catalog lot description. “According to the Nobel Foundation, the reverse ‘represents a group of three men forming a fraternal bond,’ while the inscription translates to ‘For the peace and brotherhood of men.’”

The catalog describes the medal: “This medal displays well, with choice bright yellow gold surfaces. Its heft is impressive in hand, and the devices show [sculptural] relief. A light file mark is noted on the rim at 4 o’clock on the reverse, a relic of this medal’s unceremonious appearance with a bullion buyer in South America, to whom it had been consigned for melt. A thin surface scratch is noted under Nobel’s ear, and the high rims show a few minor abrasions. The eye appeal is impressive, particularly so due to the high fineness of the gold.”