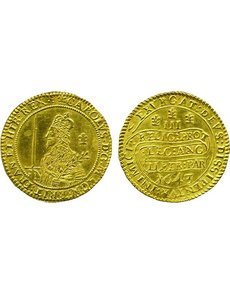 A “practically Mint State” example of a 1643 gold triple unite of Great Britain, issued under Charles I during the English Civil War at the mint in Oxford, leads all lots during St. James’s Auctions’ Sept. 27 auction.

The largest gold coin ever struck in Britain (measured by diameter but not by weight or value), the triple unite of Charles I is one of the great rarities of the English hammered series.

With a face value of 60 shillings (£3), the triple unite has a diameter of about 40 millimeters and weighs 421 grains, about .875 of an ounce. These coins were issued during the English Civil War by two mints (Oxford and Shrewsbury). They show the king (Charles I) on the obverse, with the reverse featuring his declaration of September 1642, in which he promised “to uphold the Protestant religion, the Laws of England and the Liberty of Parliament.”

Charles I made his declaration at Wellington in Shropshire, according to Coins of England and the United Kingdom, published by Spink (also called the Standard Catalogue of British Coins), 46th edition.

The finer of the two examples offered in the auction is dated 1643; this coin is in “practically Mint State,” is lustrous and struck “on an excellent round flan ... both sides beautifully centered, thus in all a quite exceptional specimen.”

The pair, combined with two offered in Dix Noonan Webb’s Sept. 28 auction (see story at www.coinworld.com/articles/pair-of-triple-unites-top-london-coin-auction/), brings the number of examples of the rarity offered in conjunction with the Coinex show to four.