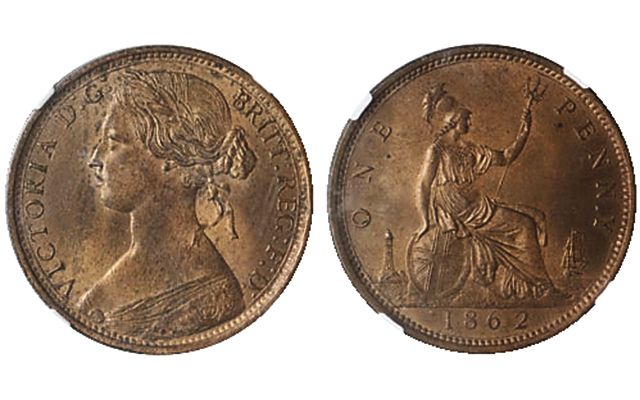 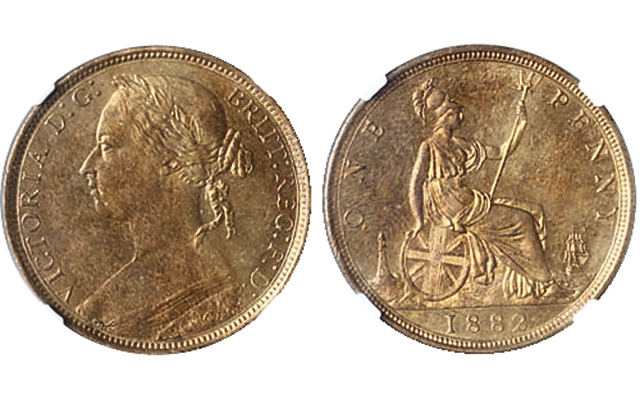 One of the highlights of the Gerald Jackson Collection of British Pennies is this 1882 penny featuring the mature bust of Queen Victoria. Graded Mint State 64 Red Brown by Numismatic Guaranty Corp., it is estimated at $12,000 to $16,000. 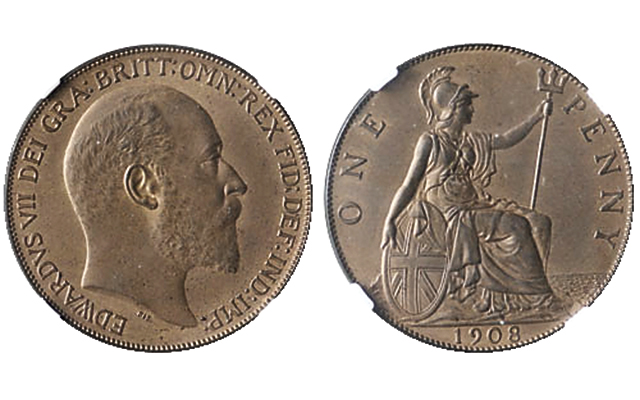 The second part of the Gerald Jackson Collection of British Pennies is coming to auction.

Spink USA will auction the second part of the collection during its Collector’s Series sale on June 17 in New York City.

The finale of the Jackson Collection, some 82 lots made up primarily of Victorian pennies, includes several coins selected by Jackson for both grade and rarity.

The British penny is one of the longest-issued denominations in the world, and while Jackson’s collection included many early “type” coins, the collection was focused on 19th and 20th century issues.

“This is a remarkable offering,” said Gregory J. Cole, Spink senior numismatist for world coins. “The first part of the Jackson Collection, which we sold this past January, did extremely well and we expect the finale to receive an equally enthusiastic response.”

Highlights in the second part include one of the finest known examples of the rare 1882 penny featuring the Mature Bust of Queen Victoria. The coin, offered as lot 1053, is graded Mint State 64 red brown by Numismatic Guaranty Corp. and has an estimate of $12,000 to $16,000. The auction firm suggests the coin could be the finest known.

Another highlight, lot 1019, is a rare overdate, the 1862/1622 penny with the Young Bust of Queen Victoria. Also graded MS-64 red brown by NGC, the coin is estimated to realize $6,000 to $8,000. The auction firm also calls this “one of the finest, if not the finest, known example of this very rare overdate variety.”

Jackson’s other example of this overdate, graded Good Very Fine, realized $3,500 in the earlier auction.

The star of the post-Victorian issues is a rare Matte Proof 1908 penny of Edward VII offered as  lot 1071. Only three pieces are recorded, according to the firm.

Other world highlights of the sale include the Christian J. Buys Study Collection of the Brooke Rajahs of Sarawak and a German New Guinea 1894-A Birds of Paradise silver 5-mark coin graded MS-64 by Professional Coin Grading Service.

For catalogs or more information about the sale, contact Spink New York at 212-262-8400 or visit its website.